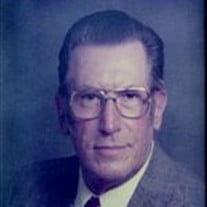 Marshall: Frederick “Fred” Braakman, age 88, of Green Valley, passed away at the Avera Marshall Regional Medical Center on Sunday, October 4, 2009. Funeral services are scheduled for 10:30 A.M. Friday, October 9, 2009, at Christ Evangelical Lutheran Church in Marshall. Dinner will be served at the church immediately following the service. Visitation will be held on Thursday evening, October 8, from 5 to 8 P.M. with a prayer service at 7:30 at the Hamilton Funeral Home in Marshall. Burial will be 3:00 P.M. Friday in LeMars Memorial Cemetery in LeMars, Iowa. Lunch will again be served, following the interment, at St. John’s Lutheran Church in LeMars. Visitation will continue one hour prior to the service on Friday, at the church. Frederick William Braakman was born to Henry and Minnie (Beekman) Braakman on February 8, 1921, in Midland Park, New Jersey. He was baptized and confirmed in the Christian faith. Fred attended school in Wykof, New Jersey before graduating from high school in Pomton Lakes, New Jersey. He served the United States honorably in World War II. He entered the service in January 20, 1943, at Camp Dodge, Iowa and was honorably discharged on December 14, 1945, in Camp Grant, Illinois. On July 18, 1947, Fred was united in marriage to Viola Hamann in Sioux Center, Iowa. He worked for the Great Northern Railroad (later, Burlington Northern) serving as station agent and dispatcher until his retirement. Fred’s enjoyments in life included fishing, hunting, reading, watching football, World War II literature and movies, attending his army reunions every summer, and spending time with family and friends. He was a member of the VFW and American Legion, Post #113. Fred was a faithful member of Christ Evangelical Lutheran Church and had served as President of Congregation. Fred passed away on October 4, 2009, at the age of 88 years, 7 months, and 26 days. He is survived by his wife, Viola Braakman of Marshall; daughters, Linda Hellbusch of Tarpon Springs, FL, and Betty (and Michael) Zeidlhack of Northfield, MN; granddaughter, Erika (and Brendan) Keough-Zeidlhack of Madison, WI; sister, Lillian (and Walter) Kaczala of Mahwah, NJ; and nieces, other relatives, and friends. He was preceded in death by his parents; son, Barry Braakman; and grandson, Nikolaus Zeidlhack. Blessed be the memory of Fred Braakman

The family of Frederick W. Braakman created this Life Tributes page to make it easy to share your memories.

Send flowers to the Braakman family.