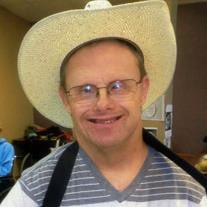 Gary Gifford, age 57, of Tyler and formerly of Russell, Minnesota, passed away on Friday, April 15, 2016, at the Tyler Healthcare Center in Tyler, Minnesota. Funeral Services are 11:00 AM Monday, April 18, 2016, at Grace First Parish in Russell. Interment will follow in the Russell Cemetery. Visitation will be from 2:00 – 6:00 PM Sunday, April 17, 2016, at the Hamilton Funeral Home in Marshall. A prayer service is scheduled for 5:00 PM. Visitation will continue one hour prior to the service, from 10:00 – 11:00 AM, on Monday at the church. Clergy Officiating: Pastors Lori VonHoltum and Jeff Greathouse Organist: Beth Erdman Congregational Hymns: “The Lord Is Risen Today” / “Jesus Loves Me” Special Music: Vince Gill ~ “Go Rest High” / Chris Tomlin ~ “Amazing Grace (My Chains Are Gone)” Honorary Casket Bearers: Tonia Swan, Traci Lehnhoff, Bridget Story, Casey Olson, Justine Gifford, Jill Lehnhoff, Kristy Gifford, Courtney Gifford, Bre Gifford, Mindy Gifford Active Casket Bearers: Brandon Gifford, Brian Gifford, Robbie Gifford, Adam Gifford, Jeff Swan, Michael Olson, Cody Story, Bill Poueymirou Gary Richard Gifford was born on October 1, 1958, in Tyler, Minnesota. He was one of twin boys born to Robert and Alta (Johnson) Gifford. He was baptized and confirmed in the Presbyterian Church in Russell. He went to school in Tyler and graduated in 1977. Gary went on to help his brothers and his mother in their careers. Gary lived in Russell most of his life until 2009, when he and Alta moved to Balaton. After 5 years there, Gary then moved to the Tyler REM house in 2014. Gary loved to help his family. He took pride doing all the chores around the house and farm. Her helped Alta in all areas of her catering business, and helped her with the Russell Newsletter. He loved to work, his biggest accomplishment was working at the Tracy and Tyler DAC and making his own money. Gary was a passionate member of the Russell Presbyterian Church and served as usher every chance he had. His other enjoyments in life included the Vikings, Twins, picking rock in his John Deere Gator, mowing the whole yard (and the ditch), watching MASH, basketball, fishing, collecting cans, and being with family. He loved ice cream with chocolate syrup and at 3:00 it was time for a can of Diet Coke break with a Hershey candy bar, no matter what else was going on. Gary Gifford entered his heavenly home on Friday, April 15, 2016 at the age of 57 years, 6 months, and 14 days. He is survived by his mother, Alta Gifford of Balaton; siblings, Bill (and Betty) Gifford of Russell, Ruth (and Dave) Lehnhoff of Balaton, David (and Becky) Gifford of Marshall, Gale (and Judy) Gifford of Deming, NM, Kent (and Joleen) Gifford of Tyler; nephews and nieces, Brandon (and Kristy) Gifford of Arco, Brian (and Courtney) Gifford of Bemidji, Tonia (and Jeff) Swan of Hills, Traci (and Bill) Poueymirou of North Salem, NY, Jill Lehnhoff of Adrian, Robert (and Mindy) Gifford of Cottonwood, Adam (and Bre) Gifford of Otsego, Bridget (and Cody) Story of Sioux Falls, SD, Casey (and Michael) Olson of Sioux Falls, SD, Justine Gifford of Sioux Falls, SD; 14 great-nephews and nieces; other relatives and many friends. Gary is preceded in death by his father, Robert Gifford; nieces and nephews, John Mark Lehnhoff, Kyle Lehnhoff, Sandra Gifford, and Dustin Gifford. A special thank you goes out to Gary’s second family at the Tyler REM house and Tracy and Tyler DAC. You will have a deserved designated seating at the funeral service on Monday. The family invites attendees to the church basement for a luncheon following the interment.

Gary Gifford, age 57, of Tyler and formerly of Russell, Minnesota, passed away on Friday, April 15, 2016, at the Tyler Healthcare Center in Tyler, Minnesota. Funeral Services are 11:00 AM Monday, April 18, 2016, at Grace First Parish in Russell.... View Obituary & Service Information

The family of Gary Richard Gifford created this Life Tributes page to make it easy to share your memories.

Gary Gifford, age 57, of Tyler and formerly of Russell, Minnesota,...

Send flowers to the Gifford family.