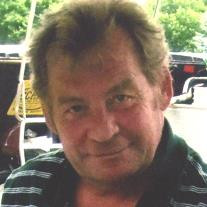 Gary “Oscar” Meyer, age 64, of Marshall, Minnesota, died on Saturday, October 5, 2019, at the Avera Marshall Regional Medical Center in Marshall. Memorial Services are 11:00 a.m. Wednesday, October 9, 2019, at the Hamilton Funeral Home in Marshall, Minnesota. A reception will follow. Visitation will be held from 5:00 – 7:30 p.m. Tuesday, October 8, 2019, at the Hamilton Funeral Home in Marshall, Minnesota. Visitation will continue one hour prior to the service, from 10:00 a.m. – 11:00 a.m. on Wednesday, October 9, 2019, again at the Hamilton Funeral Home. Gary Allan Meyer was born November 30, 1954, to George and Harriet (Swan) Meyer in Slayton, MN. He was baptized on December 19, 1954 in Hadley, MN, and was then confirmed on April 26, 1970 in Slayton. He grew up attending school in Slayton, graduating from high school with the class of 1973. During high school and for a time after, Gary worked at the local Jack & Jill Grocery store. On April 2, 1977, Gary was united in marriage to Peggy Dahl at Christ Lutheran Church in Cottonwood, MN. The couple made their home in Slayton before moving to Willmar in 1979. In 1983, the family moved to Marshall. Gary, the “Bread Man”, spent nearly 34 years driving routes and working as supervisor for Old Home Bread/Sara Lee. He also drove for Old Dutch almost another 2 years before retiring. Gary took every opportunity to spend time with his three grandchildren. He enjoyed visiting with friends and family. Gary’s love of camping started in 1989. He spent nearly every weekend at the camper on Lake Sketek since 1991, enjoying time with his family and friends. He liked to tinker on things, fix things as needed, go bowling, and recently enjoyed shows at the Chanhassen Dinner Theater. He is survived by his wife of 42 years, Peggy Meyer of Marshall; children, Tina (Nathan) Fox of Woodbury, Nate (Amy) Meyer of Lyons, NE; grandchildren, Haaken Meyer, Elizabeth Fox, and Gordon Meyer; sisters, Gail (Floyd) Radke of Slayton, Connie (James) Berglund of Iona; nieces, nephews, other relatives and friends. Gary was preceded in death by his parents, George and Harriet Meyer; sister, Wendy Nelson; niece, Mary Ann Berglund; and several aunts and uncles.

The family of Gary "Oscar" Allan Meyer created this Life Tributes page to make it easy to share your memories.

Send flowers to the Meyer family.