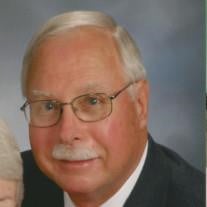 Gene Buss, age 71, of Marshall, Minnesota and formerly of Denver, Iowa, passed away on Monday, July 13, 2015 at Rice Memorial Hospital in Willmar, Minnesota. Minnesota Visitation will be held from 4:00 – 8:00 PM Wednesday, July 15, 2015 at the Hamilton Funeral Home in Marshall, Minnesota. A prayer service is scheduled for 8:00 PM. Funeral Services are 10:30 AM Saturday, July 18, 2015 at St. Peter’s Lutheran Church in Denver, Iowa. Interment will follow in the Fairview Cemetery located in Denver, Iowa. Iowa Visitation will be held from 4:00 – 8:00 PM Friday, July 17, 2015 at the Kaiser-Corson Funeral Home in Denver, Iowa. Visitation will continue one hour prior to the service on Saturday, at the church. Gene Elmer Buss was born on December 24, 1943 in Waverly, Iowa. He was raised the son of Fred and Evelyn Buss. Gene was baptized as an infant and was confirmed in his youth at St. Paul’s Lutheran Church in Waverly, Iowa. He grew up in that area and attended St. Paul’s Lutheran School before graduating with the class of 1961. On September 28, 1968, Gene was married to Brenda Huisman in Waverly. They couple raised 2 children: Jason and Gina. They lived in Waverly and Denver, Iowa, before moving to Marshall in 1988. Gene and Brenda were married for over 44 year before she passed away in 2013. Gene worked in restaurant equipment sales for Herrick Refrigeration and then owned his own business: Restaurant Supply, Inc. He then worked for Reinhart Foods in Marshall prior to retiring in December of 2012. He was working part time at Maxwell Foods in Marshall. Gene’s enjoyments in life included boating, trains, music and concerts, eating out, and spending time with his grandchildren. Gene Buss died on Monday, July 13, 2015, in Willmar, Minnesota at the age of 71 years, 6 months and 19 days. Blessed be his memory. Gene is survived by his children, Jason A. (and Michelle) Buss of Marshall, MN, Gina L. Curtis (and Brandon Simpson) of Marshall, MN; 4 grandchildren, Steven and Mika Curtis, Alex and Ben Buss; nephews, nieces, other relatives and many friends. He was preceded in death by his parents, Fred and Evelyn Buss, and wife, Brenda Buss.

The family of Gene Elmer Buss created this Life Tributes page to make it easy to share your memories.

Gene Buss, age 71, of Marshall, Minnesota and formerly of Denver,...

Send flowers to the Buss family.