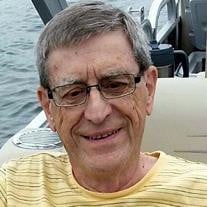 Gene Hochhalter, age 79, of Marshall, Minnesota, passed away on Friday, February 17, 2017 at the Prairie Home Hospice House in Marshall. Memorial services are 11:00 a.m. Tuesday, February 21, 2017, at Agape Fellowship Church in Marshall. Visitation will be held from 4:00 – 7:00 p.m., Monday, February 20, 2017, at the Hamilton Funeral Home in Marshall. A prayer service is scheduled for 6:30 p.m. Visitation will continue one hour prior to the service, from 10:00 – 11:00 AM, on Tuesday at the church. In Lieu of flowers, please designate memorials to Prairie Home Hospice in Marshall. Thank you. Clergy Officiating: Rev. Ben Bryant Organist: Colleen Engel Special Music: “Wind Beneath My Wings” by Erin Gleis / “You Raise Me Up” by Alex Duncan Congregational Hymns: Until Then / Amazing Grace Gene Lyle Hochhalter was born on July 19, 1937 in Missoula, Montana. He was the son of Emil and Lindy (Maier) Hochhalter. Gene was baptized in his youth at the Bethel Baptist Church in Missoula, Montana where he grew up. He attended the University of Montana where he earned his bachelor degree, master’s degree and nearly completed his doctorate in Psychology. Gene also attended the North American Seminary in Edmonton, Alberta Canada, where he met Ms. Ada Taylor. On August 25, 1962, Gene was married to Ada at the Baptist Church in Fenwood, Saskatchewan. The couple made their home in Missoula, Montana for 5 years before moving to Madison, Minnesota, to work as a school psychologist. After a couple years there, Gene then worked for Western Human Development in Marshall. He also worked as a school psychologist at area schools and served in Human resources for Hoffco in Wood Lake for about 10 years. Gene and Ada shared over 54 years of marriage together and raised 2 daughters, Heather and Jodi. Gene was a faithful member and occasional lay minister at Agape Fellowship Church in Marshall and was proud to be on the board at the House of Hope (now Hope Harbor) in Marshall. He was a truly caring person – someone who carried a paraplegic friend up the stairs to school every day, for 6 years, until they graduated together. He loved sharing a cup of coffee in the morning at Bagels and Brew with Al, Lloyd, and many others. His other enjoyments in life included woodcarving, fiddling with new electronic devices or inventions, traveling, and riding his moped. Gene passed away on Friday, January 17, 2017, in Marshall, Minnesota, at the age of 79 years, 6 months, and 19 days. Gene is survived by his wife, Ada Hochhalter of Marshall; daughters, Heather (Mo Chummun) of Marshall, Jodi Duncan of Atlanta, GA; 3 grandchildren, Taylor Hochhalter, Emily Pehrson, Alex Duncan; brother, Rod (Micki) Hochhalter of Missoula, MT; nephews, nieces, other relatives and many friends. He was preceded in death by his parents, Emil and Lindy Hochhalter.

The family of Gene Lyle Hochhalter created this Life Tributes page to make it easy to share your memories.

Send flowers to the Hochhalter family.