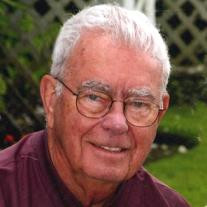 Al Smith, age 87, of Cottonwood and Marshall, Minnesota passed away on Wednesday, March 15th at the Prairie Home Hospice House in Marshall with family at his side. Traditional Visitation will be 4-7 p.m. on Sunday, March 19th at Hamilton Funeral Home with a prayer service at 6:30 p.m. A celebration and commemoration of his life will be held on Monday, March 20th at 11:00 a.m. at the Cornerstone United Methodist Church in Marshall, followed by a lunch in the church basement. Interment will be in the Cottonwood Cemetery in Cottonwood following lunch. Al was born on February 2nd, 1930 in Cottonwood, to farmer and entrepreneur, George and Amy (Larson) Smith. He was baptized at Swan Lake church in Cottonwood and spent his early years on the Smith farm in Stanley Township, Lyon County, south of Cottonwood. There he learned the art of levity as he grew up in the fold of farm hands and truckers hired by his father during the Great Depression. He graduated from Cottonwood High School in 1947. He attended college at Oklahoma University, Macalester College and later earned his business degree as part of the first graduating class at Southwest State in 1971. On July 4th, 1952, he was called to serve in the Korean War as a driver for the company commander. He recalls a commander saying to him after an especially grueling armored truck trek, “Smith, if I ever need a family driver, I want you!” On August 1, 1953, he married his high school sweetheart, Stella Ann Hoff at the Little Brown Church in the Vale in Nashua, IA. They lived in Minneapolis, Montevideo, Waterloo, IA, and Alexandria prior to settling in Cottonwood in 1968. They had five children together, Keven, Kirk, Kelly, Karleen and Kari. Life with five children revolved around football, basketball, track and baseball for the boys, volleyball, basketball and golf for the girls as well as 4-H. Despite a busy household, Al and Stella never missed a game. In later years Al’s evenings were spent helping Stella, an elementary school teacher, correct papers. Together they enjoyed being with family and welcomed their grandchildren one by one. Summers were devoted to spending family time at the lake with an entourage of little scoops and pails lined up in the sand along with family golfing games. Al loved to golf and took pride that at one point, there were 7 sets of golf clubs hanging in his garage. He also enjoyed walking, driving friends to dinner all over southwestern MN, crossword puzzles, playing cards and reading the newspaper. He loved to send unsigned cards on his travels to friends. He also was very thoughtful and would buy flowers anonymously for recent widows on their anniversary or Valentine’s Day. Shortly after their 40th wedding anniversary, on September 12, 1993, Stella passed away from cancer. In the ensuing years, Al kept a low profile as he tried to recover from his loss. Alan once again found love when he recognized a woman named Evelyn Bowman at a restaurant in St. Paul. She had lived in Marshall from 1968 until 1978. He got her phone number and eventually took her to dinner. It was an immediate affirmation of love and commitment and Al and Evie were married December 4th, 1999 at the Hamline United Methodist Church surrounded by extended family and friends. Alan and Evelyn blended their families and treated each other’s kids and grandkids as their own together. They spent many years traveling to Alaska, Scotland, Hawaii and all over the continental US. They also loved attending his Army’s company reunions throughout the years. Alan often said he didn’t know how he could be so blessed as to be loved by not only one, but two beautiful women in his life. Al lived his life devoted to Evelyn, his family and his church. The community of his friends enriched his life and he theirs. He was a man with a smile and handshake for everyone. He was very active in the community of Cottonwood and Lyon County as a member of the Cottonwood American Legion, Cottonwood City Council, Lyon County Historical Society, Lyon County Economic Development Association, Prairie Home Hospice board and was an active member of Cornerstone Methodist Church in Marshall serving in many capacities over the years. He was preceded in death by his parents; his first wife, Stella; his brothers, John and Doug; and his sister, Dorris Linnell. He is survived by his wife, Evelyn of Marshall; his children, Keven and Kendra Smith of Redmond, WA, Kirk and Lou Ann Smith of New Ulm, MN, Kelly and Chris Smith of St. Paul, MN, Karleen and John Clemens of St. Paul, MN, and Kari and Mike Snyder of Lakeville, MN; 16 grandchildren; 6 great-grandchildren; sister, Helen of Richmond, VA; sisters-in-law, Shirley and Dave Javens, and Charlotte Hoff, all of Cottonwood; as well as Evelyn’s 3 sons, Vic and Mary Bowman of St. Paul, MN, Greg and MaryAnn Bowman of Pigeon Falls, WI, and Chris and Kim Bowman of Dell Rapids, SD; her 6 grandchildren and 5 great-grandchildren - all of whom Alan thought of as his own. He is also survived by many nieces and nephews and their children and grandchildren. Blessed be his memory. Memorials are preferred to Prairie Home Hospice in Marshall.

Al Smith, age 87, of Cottonwood and Marshall, Minnesota passed away on Wednesday, March 15th at the Prairie Home Hospice House in Marshall with family at his side. Traditional Visitation will be 4-7 p.m. on Sunday, March 19th at Hamilton Funeral... View Obituary & Service Information

The family of George "Al" Alan Smith created this Life Tributes page to make it easy to share your memories.

Send flowers to the Smith family.