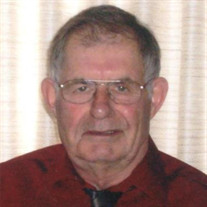 George Louwagie, age 86, of Marshall, Minnesota, died on Thursday, November 19, 2020, at the Prairie Home Hospice – Lockwood House in Marshall. Mass of Christian Burial is 11:00 a.m. Wednesday, November 25, 2020, at St. Clotilde Catholic Church in Green Valley, Minnesota. Interment will follow in the St. Clotilde Catholic Cemetery. A walk-through visitation, open to the public, will be held from 4:00 – 8:00 p.m. Tuesday, November 24, 2020, at St. Clotilde Catholic Church in Green Valley. Walk-through visitation will continue one hour prior service on Wednesday, from 10:00 – 11:00 a.m., again at the church. Occupancy limits and social distancing must be observed throughout all services. Masks are required at all public indoor gatherings. George Philip Louwagie was born on February 20, 1934, on a farm near Ghent, Minnesota, to Camiel and Magdeline (Polman) Louwagie. He attended country school through the eighth grade before going to work as a truck driver for Walt Jacob at Marshall Shipping Association. In 1956, he was drafted into the United State Army, where he served most of his time in Alaska as a wrecker operator. While serving his country, George completed his GED. After being honorably discharged, he started his farming career in 1958. He then met Catherine Hirmer, and the two married on May 2, 1959, and were married for 61 beautiful years. George was an honorary member of the Knights of Columbus and a Trustee of St Clotilde Catholic Church for 12 years. He devoted himself to the Catholic Church and instilled his faith in his family. George was a man of few words but made the ones he said count. His friends and family remember him as a strong-willed yet kindhearted man. No matter what life threw at him, George approached it with optimism and precision. He was diagnosed with Parkinson’s disease several years ago and spent his years working through the symptoms of the disease, but never let it influence his attitude toward life. George will be known for his contagious smile that could brighten people’s day, his large bowl of buttery popcorn that he would often make for friends and family, and for being one of the best storytellers around. He resided at the Lockwood House for the past several months, where the staff would often bring him root beer floats or a sweet treat (he always had a sweet tooth). George passed away peacefully surrounded by loved ones on November 19, 2020. He is survived by his wife, Catherine Louwagie of Marshall; children, Ken (Denise) Louwagie of Garvin, Jim (Barb) Louwagie of Norwood Young America, Cheryl (Craig) Bangasser of Garvin, Michele (Kim) Vermeire of Marshall, Craig (Heidi Boerboom) Louwagie of Marshall; 16 grandchildren, Adam (Victoria) Louwagie, Darin (Meg) Louwagie, Todd (CeCe) Louwagie, Amanda (Dusty) Harris, Brittany Louwagie, Anthony (Kelsey) Fratzke, Ashley Louwagie, Briana Morgan, Cody (Jordan) Morgan, Cassie Morgan, Nick (Leah) Vermeire, McKenzie Vermeire, Kylie Vermeire, Morgan Louwagie, Maci (Josh) Pomranke, Marissa Louwagie; 9 great-grandchildren; siblings, Bernice (Charles) Fischer of Marshall, Darlene Weber (Jim Lindquist) of Arizona, Shirley Schultz (Rick Perry) of Florida; brother-in-law, Dick Vroman; many nieces and nephews, other relatives, and friends. George is preceded in death by his parents, Camiel and Magdeline Louwagie; parents-in-law, Philip and Cora Hirmer; sister, Helen Vroman; brother, Ernest Louwagie; siblings-in-law, Jane Louwagie and Mike Weber. In lieu of flowers, memorials are preferred to Prairie Home Hospice in Marshall or to donor’s choice. Arrangements by the Hamilton Funeral Home in Marshall, Minnesota. 507-532-2933 Guest book and tribute wall available online at www.hamiltonfh.com.

The family of George Philip Louwagie created this Life Tributes page to make it easy to share your memories.

Send flowers to the Louwagie family.