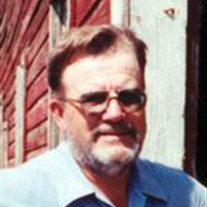 Gilbert VandeVoort, age 69, of Lynd, formerly of Woodstock, passed away at the Prince Of Peace Hospice in Sioux Falls on Monday, December 8, 2008. Memorial services will be 11:00 A.M. Thursday, December 11, 2008 at St. Stephen Lutheran Church. Visitation will be one hour prior to the service. Military honors provided by American Legion Post #113. Hamilton Funeral Home in Marshall is handling the arrangements. Condolences may be submitted at www.hamiltonfh.com. Gilbert VandeVoort was born on March 25, 1939, in Chandler, Minnesota, to Guy and Margaret (Weeda) VandeVoort. He grew up in Woodstock on the family farm and, as an adult, he farmed the land until his retirement in 2000. He was presently working at the Windsong Apartments in Marshall. Gilbert attended the American Reformed Church in Woodstock for most of his life. Upon moving to Lynd, Gilbert was a member of Wesley United Methodist Church and was presently attending St. Stephen Lutheran Church in Marshall. He enjoyed the socialization and participated in the bi-weekly Bible study group, The Good News, consisting of four couples. On December 21, 2001, Gilbert was united in marriage to Sherry Ann (Shurin) Rose in Woodstock, Minnesota. His enjoyments in life included walking the family dogs, Lyndy and Camden, bird watching and feeding, being outdoors and nature, and puttering around the yard. Gilbert passed away on December 8, 2008, at Prince of Peace Hospice in Sioux Falls, South Dakota. He had reached the age of 69 years, 8 months, and 14 days. Gilbert is survived be his wife, Sherry Ann Rose of Lynd and siblings, Leona Vandevoort of Minneapolis, Gary (and Marge) VandeVoort of Pipestone, Harvey (and Sharon) VandeVoort of Woodstock, and Ron (and Marlene) VandeVoort of Pipestone. He is preceded in death by his parents, Guy and Margaret. Blessed be the memory of Gilbert VandeVoort

The family of Gilbert Vandevoort created this Life Tributes page to make it easy to share your memories.

Send flowers to the Vandevoort family.