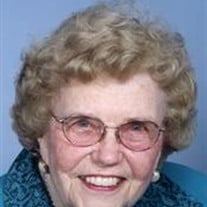 Gladys Chadwick, age 101, of Marshall, passed away on Saturday, November 2, 2013 at the Morningside Heights Care Center. Funeral services will be 10:30 A.M. Thursday, November 7th at First Lutheran Church. Visitation will be one hour prior to the service. Burial in the Emmanuel Lutheran Cemetery in Beresford, SD. Funeral arrangements are by the Hamilton Funeral Home. Gladys was born June 12, 1912, to Elmer and Clara (Gronlund) Sorenson in Wakonda, S.D. She graduated from Wakonda High School in 1929. She attended Sioux Falls College for two years and completed her college education at USD in Vermillion, S.D. After college she taught school in Irene, Wakonda, Gregory and Beresford, S.D. On June 3, 1940, Gladys was united in marriage to Irving J. Tanck in Pipestone. They lived in Beresford where Irving owned a half interest in a hardware store. On Nov. 28, 1944, Irving was killed in Germany during World War II. Gladys continued to operate the hardware store until she married Kenneth H. Chadwick on Jan. 16, 1949. Ken worked for Williams Brothers Pipeline in Alexandria. In 1950 the family moved to Marshall where he worked until his retirement. Ken died on Nov. 27, 1978. Gladys worked as an accountant for Lockwood Motors from 1955 to 1965. Starting in 1965 until her retirement in 1977, she worked for Bremer Bank where she became an officer. The Chadwick family joined First Lutheran Church when they moved to Marshall. Gladys was an active member in many areas: teaching Sunday school for 18 years, was treasurer for WELCA, served on the visitation and funeral committees and was circle chairman many times. She was also active in Bible study and quilting. Besides volunteering at the hospital auxiliary and church work, she enjoyed doing hardanger and other needlework, flower gardening, playing bridge, traveling and cheering on her Minnesota Twins. Survivors include two children, Claire (and David) Nelson of New Brighton and Douglas Chadwick of Redmond, Wash.; four grandchildren: Karen (and Mark) Violette, Mark Nelson, Ryan (and Jana) Chadwick, Lauren Chadwick; and five great-grandchildren: Elizabeth and Natalie Chadwick, Peyton, Nils and Kathryn Violette; and nieces, nephews and wonderful friends. She was preceded in death by her parents, her husbands, sister Ilene Nelson, brother Clifford Sorenson, and daughter-in-law Kathryn Chadwick. Blessed be the memory of Gladys Chadwick.

Gladys Chadwick, age 101, of Marshall, passed away on Saturday, November 2, 2013 at the Morningside Heights Care Center. Funeral services will be 10:30 A.M. Thursday, November 7th at First Lutheran Church. Visitation will be one hour prior... View Obituary & Service Information

The family of Gladys Murial Chadwick created this Life Tributes page to make it easy to share your memories.

Gladys Chadwick, age 101, of Marshall, passed away on Saturday,...

Send flowers to the Chadwick family.