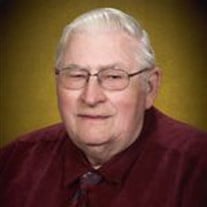 Marshall: Harold J. Hanson, age 72, of Marshall formerly of Appleton, passed away at the Minneota Manor on Saturday, November 20, 2010. Funeral services will be 10:30 A.M. Wednesday, November 24, 2101 at First Lutheran Church in Marshall. Burial will be in the Marshall Cemetery. Visitation will be 5:00 P.M. to 8:00 P.M. with a 7:00 P.M. prayer service Tuesday at the Hamilton Funeral Home. Visitation will continue at the church on Wednesday, one hour prior to the service. . Harold was born September 9, 1938 in Hegbert Township – Swift County in Appleton, MN to Matt and Signe (Johnson) Hanson. He was baptized at Long Lake Lutheran Church and confirmed at Zion Lutheran Church in Appleton, MN. He graduated from Appleton high School in 1956. He married Eunice (Schwarz) Hanson on May 4, 1963 to which two children were born, Wendell Jay and Monica Rae. He worked for Marshall Fruit as a truck driver and night foremen for 20 years, then for Reinhart Food Services as a warehouse supervisor for 20 more years. He retired in November of 2003. He liked to do crafts, gardening and being with his children, grandchildren and great-grandchildren. He is survived by wife, Eunice of 47 years and daughter, Monica (Doug) Nawrocki, grandchildren Jessica (Dustin) McCune of DeSmet SD, Zackery Sorenson and fiance’ Lorissa Lingen of Sioux Falls, SD, and Emily Sorenson of DeSmet SD; great grandchildren Ethan, Jacie, Charli and Bristol McCune; Sister Helen Zimmerman of Brooklyn Center, MN and brothers Sig of Appleton and Reuben (Sharon) of Benson and many nieces and nephews. He was preceded in death by his parents, son – Wendell, brother-in-law Marvin Zimmerman and sister-in-law Alice Hanson. He died at Minneota Manor on November 20, 2010. Blessed be his memory!

The family of Hanson John Harold created this Life Tributes page to make it easy to share your memories.

Send flowers to the Harold family.