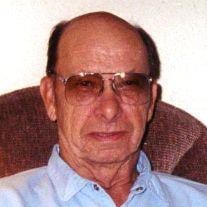 Harlan Donald Miller, age 91, of Marshall, Minnesota, passed away on Wednesday, December 16, 2015, at the Clarkfield Care Center in Clarkfield, Minnesota. Memorial Gathering of family and friends will be held from 1:00 – 4:00 PM on Saturday, January 9th, 2016 at the Bello Cucina Restaurant in Marshall. Private Family Interment will be in the Marshall Cemetery. Harlan Donald Miller was born July 10, 1924 in Cottonwood, Minnesota. He was the son of Herbert and Bessie (Huey) Miller. Harlan attended grade school and would later go on to earn his GED. On June 15, 1948, Harlan was united in marriage to Audrey Wewetzer at the Federated Church in Marshall. They lived in Clara City briefly, before returning to Marshall. They had 2 children of their own and helped raise over 80 foster children. The couple spent over 62 years of marriage before Audrey passed away on January 18, 2011. Harlan was a baker by trade. He worked at Grue’s Bakery in Marshall, then in food service at Southwest Minnesota State University, before he retired in 1987. He was a proud member of Albright United Methodist Church in Marshall. His other enjoyments in life included fishing, camping, and helping out with yard work. He was proud to serve as the most recent honorary sheriff of the annual Miller Family Campout. He will be missed. Harlan died on December 16, 2015, in Clarkfield, Minnesota at the age of 91 years, 5 months and 6 days. Blessed be his memory. Harlan is survived by his son, Donald Miller (and Patti Dunn) of Boyd; daughter, Debra (and Doug) Lutterman of Sloan, IA; foster son, Michael Nelson of Redwood Falls; 3 grandchildren, Shawn (and Tondee) Lutterman of Kansas City, MO, Tina (and Adam) Barcus of Sioux City, IA, Ashley Lutterman (and fiancé, Jeremy Stich) of Sioux City, IA; great-granddaughter, Olivia Lutterman; sisters, Betty Frahm of Marshall, Peggy Henrickson of Arden Hills; many nephews, nieces, other relatives and friends. He was preceded in death by his parents, Herbert and Bessie Miller; wife, Audrey Miller; brothers, Archie, Russ, Bernie, Glenn “Red”, Howard, Chet; and sister, Jo. In lieu of flowers the family would appreciate donations be made to Prairie Home Hospice of Marshall.

Harlan Donald Miller, age 91, of Marshall, Minnesota, passed away on Wednesday, December 16, 2015, at the Clarkfield Care Center in Clarkfield, Minnesota. Memorial Gathering of family and friends will be held from 1:00 &#8211; 4:00 PM on Saturday,... View Obituary & Service Information

The family of Harlan Donald Miller created this Life Tributes page to make it easy to share your memories.