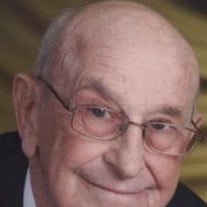 Marshall: Harland Christoffer, age 80, of Marshall, passed away at the Minneota Manor on Friday, May 2, 2014. Funeral services will be 11:00 A.M. Tuesday, May 6th at Good Shepherd Lutheran Church in Marshall. Visitation will be 4:00 P.M. to 7:00 P.M. with a 6:00 P.M. prayer service Monday at the Hamilton Funeral Home. Visitation will continue at the church on Tuesday, one hour prior to the service. Harland Lester Christoffer was born on October 10, 1933 in Sherburn, Minnesota to Louis and Nellie (Grein) Christoffer. He was baptized at St. Paul Church of Rost and confirmed at St. Paul Evangelical Lutheran Church in Lakefield.  He graduated from Windom High School in 1951. On January 20, 1952, Harland was united in marriage to Joanne Marie Fladgard. To this union five children were born, namely; Michell, Kerry, Kevin, Bryan and Todd. Harland’s career included; Elevator Manager, Agricultural Sales, and Insurance Representative for AAL. The love of his life was doing things with and for his wife and family, including his daughter-in-laws and grandchildren. He enjoyed outdoor actives of hunting and fishing. He also enjoyed sporting activities of basketball and softball.  He was active in Ducks Unlimited, Pheasants Forever and Marshall Horseshoe Club.  He is survived by his wife, Joanne of Marshall; five children, Mitchell (Peggy) Christoffer of Trophy, TX, Kerry (Lyn) Christoffer of Montevideo, Kevin (Lori) Christoffer of Lakeville, Bryan (Becky) Christoffer of Spencer, IA and Todd (Sue) Christoffer of Erwin, SD; fifteen grandchildren; eighteen great-grandchildren; brother, Doug Christoffer of Boise, Idaho; also many other relatives and friends. He was preceded in death by his parents; sister, Lois Post/Sueflow and Delores Eidhammer; and brothers, Gerald Christoffer and Clifford Christoffer (in infancy).  Harland was a faithful member of Good Shepherd Lutheran Church where he was an Elder, and active member of the choir and praise team. Blessed be the memory of Harland L. Christoffer.

Marshall: Harland Christoffer, age 80, of Marshall, passed away at the Minneota Manor on Friday, May 2, 2014. Funeral services will be 11:00 A.M. Tuesday, May 6th at Good Shepherd Lutheran Church in Marshall. Visitation will be 4:00 P.M. to... View Obituary & Service Information

The family of Harland Christoffer created this Life Tributes page to make it easy to share your memories.

Send flowers to the Christoffer family.