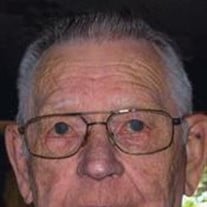 Marshall: Harold A. Lensing, age 90, of Marshall, formerly of Tyler, passed away at the Avera Morningside Heights Care Center in Marshall on Friday, January 6, 2012. Mass of Christian Burial will be 10:30 A.M. Tuesday, January 10th at Holy Redeemer Catholic Church. Burial will be in the St. Dionysius Catholic Cemetery in Tyler. Visitation will be 4:00 P.M. to 8:00 P.M. with a 4:00 P.M. rosary service and 7:00 P.M. prayer service Monday at the Hamilton Funeral Home. Visitation will continue at the church on Tuesday, one hour prior to the services. Harold was born to Albert and Margaret (Froehle) Lensing near Bancroft , Iowa on June 3, 1921. He was baptized, received First Communion, confirmed and attended parochial school at St. Anne’s Catholic Church in Wabasso. On February 12, 1945, Harold was united in marriage to Phyllis J. Rue. They farmed from 1945 to 1963 near Lamberton. From 1963 to 1964 Harold and Phyllis owned and operated a restaurant in Morgan and Harold also served as a city police officer. In 1964 the family moved to Russell where Harold went to work as a salesman for Moormans Feed, retiring in 1981. The love of his life was his family, especially spending time with his grandchildren. His other enjoyments were camping at Long Lake near Hawick, wintering in Donna, Texas , volunteer driving for Western Community Action, volunteering at the Hospital Thrift Shop and making crafts at home with Phyllis. Harold passed away at the Avera Morningside Heights Care Center on Friday, January 6, 2012. He had reached the age of 90 years, 7 months and 3 days. He is survived by his wife of 66 years, Phyllis, of Marshall; ten children, Roger (Lois) of Porter, Mary Lou (Allen) Lovejoy, of Moundsview, Lois Van Keulen, of Champlin, Janice Lensing, of Lynd, Robert (Mary) of Russell, Dean, of Bloomington, JoAnn, of Brooklyn Park, Vicki (James) VanDamme, of Russell, Julie Parulski, of Ivanhoe and Mark (Nancy) of St. James; 19 grandchildren; 40 great-grandchildren; three great-great-grandchildren; sister, Verona Wallace, of Hastings; and many other relatives and friends. He was preceeded in death by his parents, son Dale in 1971, one great grandson, several brothers and sisters, and son-in-law, Jim Van Keulen. Harold was a faithful member of Holy Redeemer Catholic Church and the Knights of Columbus. Blessed be the memory of Harold Lensing.

The family of Harold August Lensing created this Life Tributes page to make it easy to share your memories.

Marshall: Harold A. Lensing, age 90, of Marshall, formerly of...

Send flowers to the Lensing family.