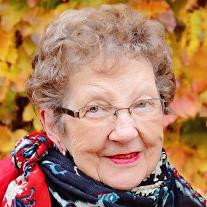 Harriet Mortenson, age 92, of Marshall and formerly of St. Louis Park, Minnesota, died on Monday, June 4, 2018, at Morningside Heights Care Center in Marshall, Minnesota. Visitation will be held at 9:30 a.m. on Tuesday, June 12, 2018, with the Funeral service 10:30 a.m. at Calvary Lutheran Church in Golden Valley. Following a reception, Interment will be at Ft. Snelling National Cemetery in Minneapolis at 1:15 p.m. Harriet Marion Flaten was born on January 28, 1926, in Camp Lake Township, Swift County, Minnesota, to Elmer and Tillie (Thostenson) Flaten. She grew up near Benson, Minnesota, and after grade school she helped on the family farm and caring for neighboring households. On March 3, 1946, Harriet was married to Alvin Mortenson. They farmed near Benson before moving to Buffalo, Minnesota, for a brief period. The family moved to St. Louis Park in 1954 where Harriet and Alvin spent a majority of their lives. In 2001 the couple moved to Washington state to be near their daughter, Judy. After Alvin passed away in 2004, Harriet remained there, moving to Golden Valley, Minnesota, in 2010. Several years later, Harriet moved to Marshall to be closer to her daughter, Lois. She was dedicated to her family and friends; prioritizing them…in her work, with her time, and in her prayers. Harriet was full of common sense, hardworking, giving, determined, and loving but above all she was loved. Harriet was a long-time member of Westwood Lutheran Church in St. Louis Park where she served the Lord in many capacities and she was a current member of Calvary Lutheran Church in Golden Valley. Our beautiful mother left us June 4, 2018, in Marshall, Minnesota, at the age of 92 years, 4 months, and 7 days. Harriet will prepare a place for us to be with our Heavenly Father. She always welcomed us with love and will again. Blessed be her memory. Harriet is survived by her daughters, Judy (Jerry) Lawson of Wenatchee, WA, Lois (Marvin) Mohn of Cottonwood; 3 grandchildren, Kristin Lawson (Marcus Vincent) of Portland, OR, Michael (Rachel) Ralles of Washington, DC and their children: Jack, Benjamin, and Samuel, Daniel (Jennifer) Ralles of Minnetonka and their son: William; Marvin’s daughters, Melinda (Mark) Loe of Chanhassen and their children, Hazel (Mike) Sorenson of Bartlesville, OK and their children; sister, Clarice Schroeder of Appleton; nieces, nephews, other relatives, and many friends. She was preceded in death by her parents, Elmer and Tillie Flaten; husband, Alvin Mortenson; and siblings, Alvera Haugen and Elroy Flaten.

Harriet Mortenson, age 92, of Marshall and formerly of St. Louis Park, Minnesota, died on Monday, June 4, 2018, at Morningside Heights Care Center in Marshall, Minnesota. Visitation will be held at 9:30 a.m. on Tuesday, June 12, 2018, with the... View Obituary & Service Information

The family of Harriet Marion Mortenson created this Life Tributes page to make it easy to share your memories.

Harriet Mortenson, age 92, of Marshall and formerly of St. Louis...

Send flowers to the Mortenson family.