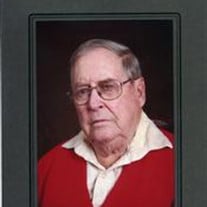 Marshall: Harvey B. McVey, age 90, of Marshall, passed away at Avera Morningside Heights Care Center on Wednesday, April 3, 2013. Funeral services will be noon on Monday, April 8th at Wesley United Methodist Church. Visitation will be 4:00 P.M. to 7:00 P.M. with a 6:00 P.M. prayer service Sunday at the Hamilton Funeral Home. Visitation will continue at church on Monday, one hour prior to the service. Burial will be in the Riverside Cemetery in Spencer, IA. Harvey Bruce was born in Webb, IA on August 20, 1922 to parents Jesse and Elsie (Wells) McVey. He was baptized and confirmed in the Christian faith, and graduated from Spencer High School in 1939. Harvey entered the United States Army on November 16, 1942 where he worked on B-17 s and B-29s. Harvey was honorably discharged on February 19, 1946. On January 15, 1947, Harvey married Vera Walstrom in New London, WI. They made their home in Spencer. IA for a short period of time and moved to Marshal in 1947.Harvey and Vera had one son, Bruce. In 1946, after completing his military service, Harvey began employment with Arnold Motors Supply in Spencer, IA. After moving to Marshall he was a route driver for the first sixteen years. In 1960 Harvey began working in the store and was promoted to store manager in 1961, retiring in 1989. During his life, Harvey enjoyed watching his grandson playing sports also, bowling, golfing, fishing, hunting, feeding the birds and vegetable gardening. Harvey is survived by his son Bruce (and Laurie) of Marshall: grandson, Adam; three step-grandsons, Thane, Andy and Trevor Hemis; three siblings, Arlene Hamrick of Spencer, IA, Henry (Betty) McVey of Detroit, MI and Richard (Diane) McVey of Tucson, AZ; also many other relatives and friends. Harvey was preceded death by his parents; wife, Vera on May 14, 2009; a brother and his wife, Howard and Bonnie McVey; and brother-in-law, Orley Hamrick. Harvey was a faithful member of Wesley United Methodist Church, American Legion Post 113 of Marshall, and S.M.S.U. boosters. Blessed be the memory of Harvey McVey.

The family of Harvey Bruce McVey created this Life Tributes page to make it easy to share your memories.

Send flowers to the McVey family.