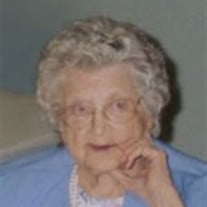 Hazel M. Lavoie, age 102, of Marshall, passed away at the Avera Morningside Heights Care Center on Friday, February 6, 2009. Funeral services will be 2:00 P.M. Tuesday, February 10, 2009 at the Hamilton Funeral Home. Visitation will be two hours prior to the service. Condolences may be sent to www.hamiltonfh.com. Hazel Mildred Lavoie was born to Rufus and Mildred Hastings on May 29, 1906 in Spencer, Iowa. She was baptized and confirmed in the Methodist faith and attended Lynd Public School. On November 29, 1925, Hazel was united in marriage to William E. Lavoie at the Hastings farm. They farmed in Shelburne Township and Hazel also worked at the Weiner Family egg plant. She retired in 1966. She continued to farm with William until they retired and moved off the farm in 1970. William passed away on February 8, 1995. Hazel entered the Avera Morningside Heights Care Center on October 24, 2002. She joined William in death on Friday, February 6. 2009. She had reached the age of 102 years, 8 months and 5 days. She is survived by three daughters, Donna Czekaj of Cheektowaga, NY, Darlene Lavoie of Sanborn and Marlene Hoeft of Marshall; 18 grandchildren, Lavonne Labat, Linda Graves, Diane Bucher, Lois Thooft, Melanie Elder, Loraine Thooft, Guy Thooft, Clayton Petersen, Theresa Shrader, Lisa Stein, Cheryl Czekaj, Steven Czekaj, David Czekaj, Michael Czekaj, Sheila Pralow, Randy Lavoie and Roger Lavoie; 29 great grandchildren; six great-great-grandchildren; half brother, Howard Hastings of TX; and many other relatives and friends. She was preceded in death by her parents; husband; 3 sons, Dean, Clayton and Edwin; 4 brothers, Clifford, Ervine, Arden and Leonard; sister, Lucille; 2 grandchildren, one in infancy (Donna) and Dwayne Lavoie; and 4 great grandchildren. Hazel’s enjoyments in life were gardening, walking, playing cards and dancing. The love of her life was her family and being a loving wife, mother and grandmother. She will be remembered for her hospitality and her Sunday dinners. Hazel was a member of the Wesley United Methodist Church at the time of her death. Blessed be the memory of Hazel Lavoie

The family of Hazel Mildred Lavoie created this Life Tributes page to make it easy to share your memories.