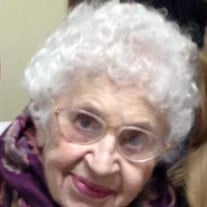 Hazel Margaret (Wiese) England, age 100, of Lynd, passed away Saturday, October 18, 2014, at the Prairie Home Hospice House in Marshall. Funeral services are Thursday, October 23, 2014, 1:00 PM, at Zion Evangelical Lutheran Church in Island Lake Township, Minnesota, with interment following in the church cemetery. Visitation will be held Wednesday, October 22, from 4:00 – 8:00 PM at the Hamilton Funeral Home in Marshall with a prayer service scheduled for 7:00 PM. Visitation will continue on Thursday, one hour prior to the service, from noon – 1:00 PM at the church. Clergy Officiating: Pastor William Ziebell Congregational Hymns: “Abide With Me,” “How Great Thou Art,” “Take My Hand And Lead Me,” “Heaven Is My Home” Active Casket Bearers: Cole Stephan, John Wiese, Steve Wiese, Tom Wiese, Justin Wiese, Eric Kracke Honorary Casket Bearers: Hazel’s grandchildren and great-grandchildren Hazel Margaret Wiese was born on March 7, 1914, at Fort Calhoun, Nebraska. She was the daughter of Carl Gustav and Antoinette (Ostergaard) Wiese. Hazel was baptized and later confirmed as an adult in 1946 at Zion Ev. Lutheran Church in Island Lake Township, Minnesota. She grew up on a ranch near Purdum, NE, and attended country schools before graduating from high school in Thedford, NE, in 1931. She went on to help her husband work the land and teach elementary school. On April 29, 1933, Hazel was united in marriage to Lawrence Albert Wiese in Broken Bow, NE. The couple made their home on a ranch near Mullen, NE. The couple then moved in 1936 to farm in Pine River, MN and then in 1941 to Spicer, MN, and then in 1946 to Lynd where she was currently living. The couple was blessed with 5 children, Don, Georgia, Evelyn, infant son, and Robert. Lawrence died in December of 1971 and Hazel remained on the farm. On December 31, 1983, Hazel was united in marriage to Henry England at Zion Ev. Lutheran Church and the couple shared 13 years of marriage and lived in Balaton. Henry died on April 12, 1996. In addition to being a loving homemaker and farm wife, Hazel worked several years as a school teacher in Elsmere and then North of Mullen, Nebraska. Hazel was a past member of St. Peter’s Lutheran Church in Balaton where she served on the ladies aid. She was also a long-time member of Zion Ev. Lutheran Church where she was a member of the ladies aid and taught Sunday school. She was an avid gardener, she loved her flowers and shared them with many with friends and neighbors. She excelled at Scrabble and crossword puzzles, and was a talented seamstress. She loved her community and always tried to better the places she lived. Above all, Hazel was devoted to her family and her church. She faithfully fulfilled life’s duties deriving strength from the Lord. She has left a wonderful legacy both to her family and community. Hazel (Wiese) England died on Saturday, October 18, 2014, in Marshall, Minnesota at the age of 100 years, 7 months and 11 days. Blessed be her memory. Hazel is survived by her children, Don E. Wiese (and companion, Beverly Hammer) of Bloomington, Evelyn (Bill) Shriver of Augusta, KS, Robert B. (Shirley) Wiese of Lynd; step-daughter, Janine (Ivan) Enter of Nicolett; 23 grandchildren, Alicia, Michelle, Tierza, Gina, Don “Buddy” II, Carla, Allison, Matthew, Michael, Kevin, Debbie, Krista, Ron, Kim, Tom, Steve, Annette, Amy, John, Jennifer, Rachel, Jon, Shawn; 38 great-grandchildren; 8 great-great-grandchildren; sister, A. Arlyne Werner of Thedford, NE, nieces, nephews, other relatives and many friends. Hazel is preceded in death by her parents, Carl and Antoinette Wiese; first husband, Lawrence Wiese; second husband, Henry England; infant son; daughter, Georgia Gilmore; grandchildren, Leaha Wiese, William Shriver, Marci Shriver, Rebecca Shriver; siblings, Dorthea (Ray) Rogers, Ethelle Wiese, Evelyn (Howard) Thompson, Carl H. (Lorraine) Wiese; and brother-in-law, Don Werner. The family invites everyone to the church basement for a luncheon following the services. Memorials are preferred to Prairie Home Hospice of Marshall or Zion Evangelical Lutheran Church in Island Lake Township.

The family of Hazel Margaret (Wiese) England created this Life Tributes page to make it easy to share your memories.