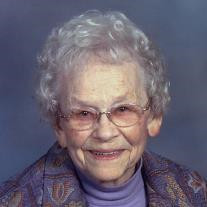 Helen Kathryn Anderson, age 101, of Marshall, Minnesota, passed away on Sunday, August 27, 2017, at Morningside Heights Care Center in Marshall, Minnesota. Funeral Services are 11:00 a.m. Friday, September 1, 2017, at Christ United Presbyterian Church in Marshall. Interment will follow in the Marshall Cemetery. Visitation will be held from 4:00 – 8:00 p.m. Thursday, August 31, 2017, at the Hamilton Funeral Home in Marshall. A prayer service is scheduled for 7:00 p.m. Visitation will continue one hour prior to the service, from 10:00 – 11:00 a.m., Friday at the church. Helen Kathryn Stark was born November 9, 1915 in Cedar Rapids, Iowa, to Frederick Ferdinand and Helen Margaret (McCartney) Stark. She was baptized at the First Baptist Church in Cedar Rapids and graduated from Washington Senior High School in 1934. Her intense love for babies and children led her to employment at the infant wear department of a “five-and-ten-cent” store. It was there she met Ted, a high school industrial arts teacher, who was shopping for his young son, David, whose mother had died. On December 18, 1936, she married Theodore Q. Anderson at the First Baptist Church in Cedar Rapids, Iowa. To that union three children were born, one daughter dying in infancy. Helen was a member of the Westminster Presbyterian Church in Cedar Rapids, Iowa, and after moving with her family to the farm west of Marshall in 1952, she joined Christ United Presbyterian Church in Marshall. She was very active in the church, serving as president of PW, Sunday School teacher, Elder, and most recently as Deacon. Other activities during her life included Campfire Girls, King’s Daughters, Cub Scouts, PTA, Camden Vikings (camping) Club, 4-H, Sew & So Club, USTA Club, Doll Club, and Gideon’s Auxiliary. She was a good baker and cook, and was an expert seamstress, keeping the family and her dolls well-dressed. In the 1960’s Helen returned to her favorite employment, that of selling children’s clothing, this time at Wee Moderns in Marshall. During this time she also took a renewed interest in doll collecting, and after their move to town in 1984, she began to give presentations of her collection, which included many of her mother’s dolls. Although caring for family and spending time with her grandchildren were so very important to her, it was clear that following Jesus was her deepest desire. Helen always looked for the best in everyone she met, gave encouragement, smiled often, laughed freely, and prayed earnestly. She was always willing to give devotions and looked for people who needed a Gideon Bible or New Testament. Helen passed away at Morningside Heights Care Center on August 27, 2017. She had reached the age of 101 years old. Blessed be her memory. Survivors include two sons, David (Ellen) of Crystal, Ted Jr. (Illa) of Marshall; one daughter, Kristen (David) Williams of Ashby; 7 grandchildren; and 11 great-grandchildren. She was preceded in death by her parents; her husband; infant daughter, Judith Ann; brothers Greg, and John; and sister, Gretchen.

The family of Helen Kathryn Anderson created this Life Tributes page to make it easy to share your memories.