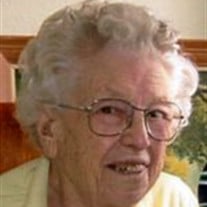 Helen Halling, age 87, of Marshall, passed away at the St. Cloud Hospital on Tuesday, February 19, 2008. Funeral services will be at 2:00 P.M. on Saturday, February 23, 2008 at the Christ Evangelical Lutheran Church in Marshall. Burial will be at a later date in the Edgerton Cemetery. Visitation will be one hour prior to the service at the church Saturday. Hamilton Funeral Home is in charge of the arrangements. Helen Wilma Kortlever was born on May 14, 1920 in rural Murray County to Frederick and Hattie (Vanderlinden) Kortlever. She attended Holland rural school. She was raised in the reformed and Presbyterian churches. In 1945, she was united in marriage to August Boll. She then became a member of the Wisconsin Synod Lutheran Church. She was a proud 50-year member of Christ Evangelical Lutheran Church in Marshall, joining in January of 1958. After Augusts’ death in 1968, she married Joseph Halling in 1974. He passed away in 1983. Helen worked various jobs and including homemaker, Southwest College food service, meal site volunteer, and she also volunteered as a social services driver. In 1996, Helen won the Lyon County Outstanding Senior Citizen’s Award. Helen’s enjoyments in life included fishing, playing cards and dice, games, volunteering, and spending time with family and friends. She is survived by her sons, Morris Boll of Clear Lake (and special friend Linda Rohland) and Rollie (and Margaret) Boll of Elk River; daughter-in-law, Mary Severson Boll of Minneapolis; 5 sisters; 4 brothers; 3 grandchildren; and 6 great-grandchildren. Helen was preceded in death by her infant daughter; husband, August Boll; husband, Joe Halling; parents, Fred and Hattie; and brother, Gerald Kortlever. Blessed Be the Memory of Helen Halling.

Helen Halling, age 87, of Marshall, passed away at the St. Cloud Hospital on Tuesday, February 19, 2008. Funeral services will be at 2:00 P.M. on Saturday, February 23, 2008 at the Christ Evangelical Lutheran Church in Marshall. Burial will... View Obituary & Service Information

The family of Helen Wilma Halling created this Life Tributes page to make it easy to share your memories.

Helen Halling, age 87, of Marshall, passed away at the St. Cloud...