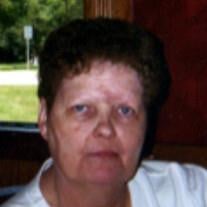 Helen Elaine Lamprecht, age 68, of Marshall, passed away on Sunday, September 6, 2015, at the Colonial Manor Care Center in Balaton. Funeral Services are 3:00 PM Saturday, September 12, 2015, at the Hamilton Funeral Home in Marshall. Interment will be in the Marshall Cemetery. Visitation will be held one hour prior to the service, from 2:00 – 3:00 PM, on Saturday at the funeral home. Clergy Officiating: Rev. Anne Veldhuisen Active Casket Bearers: Jared Miller, Brandon Miller, Gary Westberg, Joel Haney Helen Elaine De Groot was born on June 17, 1947, in Luverne, Minnesota. She was the daughter of Clarence and Mildred (Suumeyer) De Groot. Helen attended school in Big Lake and Tracy, Minnesota. Helen was united in marriage to Alan Haney. The couple lived in Tracy where they had two children, Kim and Joel. She was later married to Darwood Lamprecht in Brownton, Minnesota. Helen lived in Tracy and Brownton before moving to Marshall where she spent a majority of her life. Helen focused on her family and was a homemaker for many years. She supplemented her time as a nurse, waitress and bartender. She was also proud to volunteer at the Women’s Shelter. Her enjoyments in life included playing bingo and dancing, but she loved spending time with her grandchildren. Helen died on Sunday, September 6, 2015 at the age of 68 years, 1 months, and 20 days. Blessed be her memory. She is survived by her children, Kim Miller of Marshall, Joel (and Melissa) Haney of Marshall; grandchildren, Brandon Miller of Marshall, Jared Miller of Marshall, Casi Artaga of Las Vegas, NV, Jennifer Haney of Marshall, Stephanie Haney of Marshall, Garrett Zimmel of Farmington, great-grandchildren, Mario, Maya, Emilio; siblings, James (and Maria Luisa) De Groot of Walnut, CA, Bruce (and Monica) De Groot of Sioux Falls, SD, Beverly (and Ralph) Roberts of Marshall, Karen Voges of Sioux Falls, SD; nieces, nephews, other relatives and friends. Helen is preceded in death by her parents, Clarence and Mildred De Groot; and first husband, Alan Haney.

The family of Helen Elaine Lamprecht created this Life Tributes page to make it easy to share your memories.

Helen Elaine Lamprecht, age 68, of Marshall, passed away on Sunday,...

Send flowers to the Lamprecht family.