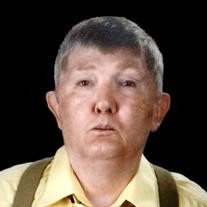 Herald Christensen, age 80, of Marshall, Minnesota, died on Tuesday, March 12, 2019, at the Avera Marshall Regional Medical Center in Marshall, Minnesota. Memorial Services are 2 p.m. Tuesday, March 26, 2019, at Holy Redeemer Catholic Church in Marshall. Interment will follow in the Calvary Catholic Cemetery. Visitation will be held from 5:00 – 7:00 p.m. Monday, March 25, 2019, at the Hamilton Funeral Home in Marshall. A prayer service is scheduled for 6:30 p.m. Visitation will continue one hour prior to the service, from 1:00 – 2 p.m., on Tuesday at Holy Redeemer Church. Herald Francis Christensen was born on January 16, 1939, to Christian and Gladys (Buroker) Christensen in Benson, Minnesota. He was born the fourth out of eight children in the family. In his early years, Herald lived in Faribault, Cambridge, and Willmar at State Hospitals. He moved to Marshall on August 23, 1974, where he has since lived and been served by REM since November 1, 1996. Herald worked at the Lyon County DAC/ Advance Opportunities in Marshall during that time, and recently retired after he became ill. Herald was baptized in the Lutheran Faith on June 3, 1967 while at Faribault State Hospital. He had recently attended Holy Redeemer Catholic Church in Marshall as frequently as possible with his housemates or long-time friends, the Doom family. Herald went through confirmation classes and became a member of the parish in June of 1997. Herald was a man of few words, but enjoyed ringing the Salvation Army Bell, going bowling, playing Bingo, napping, camping, Shetek Lutheran Bible Camp, coloring and painting. Herald Christensen is survived by the many friendships he created with the Tony Doom Family, his caretakers, and housemates. He is preceded in death by his parents and siblings, Gene, Lorraine, Joanne, Nona Mae, Leo, Carol Gladys, and Lester. Blessed and eternal be his memory.

The family of Herald Francis Christensen created this Life Tributes page to make it easy to share your memories.

Send flowers to the Christensen family.