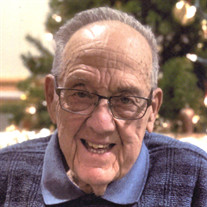 Herman “Butch” Ochsendorf, age 83, of Marshall, Minnesota, died on Saturday, February 15, 2020, at the Avera Morningside Heights Care Center in Marshall. Memorial services are 11:00 a.m. Tuesday, February 18, 2020, at Good Shepherd Lutheran Church in Marshall, Minnesota. Following a reception in the church basement, interment will be in the Canby City Cemetery. Visitation will be held from 4:00 – 8:00 p.m. Monday, February 17, at the Good Shepherd Lutheran Church in Marshall, Minnesota. A prayer service will begin at 7:00 p.m. Visitation will continue one hour prior to the service on Tuesday, from 10:00 – 11:00 a.m., again at the church. Herman “Butch” Ronald Ochsendorf Jr. was born September 29, 1936 to parents Herman and Amelia (Jants) Ochsendorf. Butch grew up in Oshkosh Township, Yellow Medicine County, MN where he was baptized as an infant and was confirmed at the Nicolai Lutheran Church in Canby. He attended school in Canby through the 8th grade and then went to help his parents on the family farm. On August 6, 1960, Butch was united in marriage to Mavis Schmidtke in Canby. The couple lived and farmed outside Canby until 1971 when they moved to Maxwell Township by Dawson. The couple lived and farmed there for the next 40 years while raising their 4 children. Butch moved with Mavis to Marshall in July 2011. Butch was a faithful member of Nicolai Lutheran Church in Canby where he served as an elder. When they moved to Marshall, they joined the Good Shepherd Lutheran family. He was also a 4-H leader and won the Minnesota Young Hog Farmer Award. He was a devout and meticulous farmer ready to help anybody as long as they drove an International or a Chevy. Butch was extremely handy around the farm and excelled at woodworking. He was a very social person, a jokester and great family man who always attended church, no matter what. Butch’s enjoyments in life included music, softball, bowling, tractor pulls, watching the Vikings and Gophers, drawing and golfing. Butch was a member of the Dawson golf association leaving Mavis to mow every Thursday. He never missed a child’s concert or sporting event and cherished family time spent at the cabin on Lake Shetek. He was blessed to take trips to Canada fishing and bus tours to Branson MO, Washington DC, New York City and Glacier National Park. Herman died Saturday, February 15, 2020 in Marshall Minnesota at the age of 83 years, 4 months, and 16 days. Blessed be his memory. Butch is survived by his wife of 59 years, Mavis Ochsendorf, of Marshall; 4 children, Julie (Tony) Kramer, of Vesta, Nancy (Kyle) Lundeen, of Marshall, Terry (Naomi) Ochsendorf, of Amboy, Kimberly Haugen (Loren Sieve), of Lismore; 10 grandchildren, Danielle Kramer, Desirae Kramer, Dylan Kramer, Kari (Michael) Karsky, Paytyn Lundeen, Mason Ochsendorf, Caden Ochsendorf, Cooper Ochsendorf, Synjin Haugen, Tobias Haugen; 3 great-grandchildren, Kamyn, Kaceyn, Koralyn; many nieces and nephews, other relatives, and friends. Butch was preceded in death by his parents, 8 sisters, and 4 brothers.

The family of Herman “Butch” Ochsendorf created this Life Tributes page to make it easy to share your memories.

Send flowers to the Ochsendorf family.