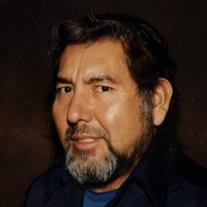 Hermilo Sandoval Carrera, age 73, of Marshall, Minnesota, passed away on Monday, June 6, 2016 at the Prairie Home Hospice House in Marshall. Funeral Services are 11:00 AM Friday, June 10, 2016, at the Hamilton Funeral Home in Marshall. Interment will be in the Marshall Cemetery. Visitation will be held one hour prior to the service, from 10:00 – 11:00 AM Friday, at Hamilton Funeral Home in Marshall. Clergy Officiating: Pastor Pedro Monterrso Casket Bearers: Hermilo Sandoval, Jr. ∙ Jose Guerra, Sr. ∙ Pedro Monterrso ∙ Josiah Biwott ∙ Jose Guerra, Jr. ∙ Bryan Guerra ∙ Frank Caradonna Hermilo Sandoval Carrera was born on Jan 13, 1943, in Sinaloa, Mexico, and raised there. He was the son of Pablo and Felicitas (Carrera) Sandoval. Hermilo made his way to Santa Ana, California, where he spent most of his life. While there, he met and married Imelda Hernandez and the couple raised 5 children. Hermilo worked his entire career in computers and technology. In 2005, Hermilo and Imelda settled in Marshall, Minnesota, near family. His enjoyments in life included singing, boxing, and growing tomatoes and peppers. Hermilo Sandoval Carrera died on Monday, June 6, 2016 at the age of 73 years, 4 months and 24 days. Blessed be his memory. He is survived by his 5 children, Jose (and Marleny) Guerra of Dennison, Iowa, Linda (and Frank) Caradonna of Marshall, Hermilo (and Claudia) Sandoval of Montevideo, Maria (and Josiah) Biwott of Marshall, Isaura (and Angel Meza) Sandoval of Marshall; 13 grandchildren; former wife, Imelda Sandoval of Marshall; brother, Rodolfo (and Jessica) Lopez of Santa Ana, California; nephews, nieces, other relatives and friends. Hermilo is preceded in death by his parents, Pablo and Felicitas Sandoval; brothers, Juan Sandoval and Manuel Sandoval.

The family of Hermilo Sandoval Carrera created this Life Tributes page to make it easy to share your memories.