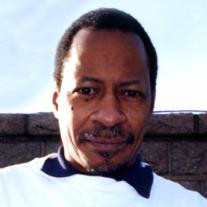 Horace Williams, age 62, of Marshall, Minnesota, passed away on Wednesday, March 15, 2017, at his home in Marshall, Minnesota. Funeral Services are 4:00 p.m. Monday, March 20, 2017, at the Hamilton Funeral Home in Marshall. A second service will be held in Minneapolis on Tuesday morning. Interment will be Tuesday in the Crystal Lake Cemetery in Minneapolis, Minnesota. Visitation will be held one hour prior to the service, from 3:00 – 4:00 p.m., Monday, March 20, 2017, at the Hamilton Funeral Home in Marshall. Horace Williams was born on February 16, 1955 in Selma, Alabama. He was raised by his mother, Hattie Williams in Selma. Horace graduated from Brantley High School there in 1973 and then moved to Minneapolis, Minnesota where he worked for Honeywell. In 1997, Horace needed a change of scenery and moved to Marshall. On June 7, 2002, Horace was united in marriage to Judith Nyabidi in Marshall. They shared the past 15 years of marriage together. Horace worked for Hoffco in Wood Lake, Minnesota, before he retired due to health reasons in 2007. Horace enjoyed fishing and spending time outdoors. He and Judy would often get in the car and go for a drive “just because.” He also enjoyed time spent with family and friends. He will be deeply missed. Horace Williams passed away in Marshall, Minnesota, on Wednesday, March 15, 2017, 27 days after his 62nd birthday. Horace is survived by his wife, Judy Inyele Williams of Marshall; 5 children, Horace Jr. (and Brittani) Williams of Minneapolis, Jamar Williams of Minneapolis, Andrew Williams of Marshall, Amaya Williams of Marshall, Amasely Williams of Marshall; 5 grandchildren, Destinee, Kaleya, Kali, Kemari, Jamar Jr.; mother, Hattie Reese of Minneapolis; sister, Gayle Linsely of Minneapolis; nephews, nieces, other relatives and friends. He was preceded in death by his aunt, Martha Williams, and uncles, Henry and Lee Williams. Blessed be his memory.

The family of Horace Williams created this Life Tributes page to make it easy to share your memories.