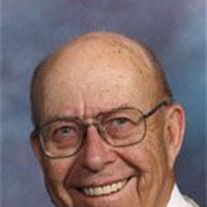 Marshall: Howard J. Johnson, age 84, of Marshall, passed away at the Prairie View Health Care Center in Tracy on Tuesday, November 2, 2010. Funeral services will be 2:00 P.M. Saturday, November 6 at St. Stephen Lutheran Church. Burial will be in the Marshall Cemetery. Military honors furnished by American Legion Post 113. Visitation will be held at Hamilton Funeral Home on Friday 4:00 P.M. to 8:00 P.M. with a 6:30 P.M. Prayer Service. Visitation will continue on Saturday one hour prior to the service at the church. Howard J. Johnson, 84 Howard James Johnson, a man who sought very little for himself except for an evening bowl of ice cream and a warm blanket, asked for 365 more days as his Christmas present last year – and he got to unwrap almost all of them. Howard, a life-long resident of Marshall, who owned E. A. Johnson Produce with his wife Elaine, died from Lewy Body Dementia on Nov 2nd, just 2 days shy of his 85th birthday. He was comforted by his wife of 60 years, Elaine, his daughter Deborah, and his middle son John. Howard was born on November 04, 1925 to Elmer A. & Hannah “Etta” (Hovland) Johnson. He was proud of the fact that he was a native of Marshall, MN. “You aren’t really from Marshall unless you were born here,” Howard often exclaimed with a big smile. On the 13th day of December 1925 he was the first infant member baptized in the First English Lutheran Church. After playing basketball and football for Marshall, although not very well by his own admission, Howard graduated from High School in 1943, third in his class. He joined the Army in January of 1944 as a member of the 100th Infantry Division and shipped over seas to the European Theater. He spent the evening before his 19th birthday in Southern France making snow angels – moving onto the front lines the very next morning. For heroic achievement in action on November 20th, 1944 in the vicinity of Raon L’Etape, France, Howard was awarded the first of two Bronze Stars. While guarding a minefield, Howard heard the approach of a returning patrol of riflemen. When the patrol was intercepted by enemy troops and forced to return through the minefield, Howard immediately ran forward to contact the riflemen and guide them through. When one member of the patrol stepped on a mine and was seriously wounded, Howard courageously carried the man to the safety of his own lines, while also directing the remainder of the riflemen through the hazard. This was just the first documented example of Howard’s dedication to others, and one of many, many times throughout his life where he would go the extra mile to help someone in need. When thanked for his military service, Howard was quoted to say “don’t thank me, just love your country”. Following his honorable discharge on April 9, 1946, Howard, having turned down a full scholarship to attend The University of Oxford in Oxford, United Kingdom, returned home to resume working at Johnson Produce, the business founded by his father in 1921. In 1947 Howard met his bride-to-be, Elaine A. Halvorson, in church choir practice. After a 3 year courtship, many practical jokes, and a broken spring in the passenger’s side of the bench seat of his Model A (forcing Elaine to sit very close to him) they were married on October 22, 1950. Elaine’s bridesmaids were Eunice Halvorson and Donna Johnson, and Howard’s groomsmen were Ervin Halvorson and Glenn Gniffke. After a honeymoon trip to Hot Springs, Arkansas, Howard and Elaine made their home in Marshall. Together they raised four children: Deborah of Marshall, MN, Robert of Coral Gables, FL, John of Dublin, TX, and Thomas of Watkinsville, GA, and a granddaughter Jacque Anderson of Dell Rapids, SD. Howard started working at E. A. Johnson Produce at age 5, and except for the years that he was in the military, he devoted himself to the business until his retirement at age 82. Although Johnson Produce was an agri-business where family farmers brought their cream and eggs, and bought feed, seed, and fertilizer, Howard told his family that he “sold service” because his customers could buy feed anywhere. During this time Howard was also very generous, extending credit to many of his customers. He felt that his commitment to his business, customers and community was personally rewarding, and considered many of his customers a part of his extended family. A good day for Howard was getting up, going down to the “station”, spending time with his customers, sharing coffee and a cookie with his wife, tending to his geraniums, and reading the sports page. His Tiger pride never subsided - he was an avid sports fan and closely followed his own children, his neighbor’s children and his customer’s children. In the 94-95 basketball season he and his wife Elaine were selected as Tiger fans of the year. Howard taught Sunday school for 15 years, was President of the local chapter of the Lutheran Brotherhood, and served on the church board at First Lutheran Church in Marshall. After joining St. Stephen Lutheran Church, he continued his commitment to church and God. Howard will be lovingly remembered by his wife of 60 years, Elaine, his children, Deborah Anderson, Robert (Layne Tidwell), John, and Thomas (Christine Cool), his grandchildren Jacque (Lee) Weidauer, and Angelique Johnson, his sister Donna “Tiny” (Vern) Nordaune, sister-in-laws Barbara Halvorson and Eunice “Eunie” Gniffke, and many nieces and nephews. Finally, Howard’s family would like to thank Prairie View Healthcare Center (Tracy, MN) and Compassionate Care Hospice (Worthington, MN) for their tender loving care.

The family of Howard J. Johnson created this Life Tributes page to make it easy to share your memories.