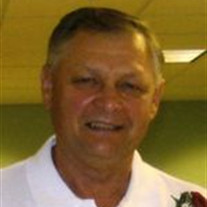 Howard Serreyn, age 60, of Green Valley died on Friday, November 23, 2007 at his residence. Funeral Services will be 10:30 A.M. Tuesday, November 27, 2007 at Holy Redeemer Catholic Church in Marshall. Burial will be at a later date in the Calvary Cemetery. Visitation will be on Monday, November 26, from 5 to 8 P.M. with a prayer service at 7:00 P.M. at the Hamilton Funeral Home. Visitation will continue one hour prior to the service on Tuesday, at the church. Howard Allen Serreyn was born February 3, 1947, in Ivanhoe, Minnesota to Oscar and Evelyn (Bradtke) Serreyn. Howard was baptized, confirmed, and took first communion at Holy Redeemer Catholic Church. He lived in Ivanhoe, Arco, and Marshall before settling in Green Valley. Howard was united in marriage to Pauline Labat on April 18, 1970 in Marshall, MN. He was employed at the Avera Medical Center, working in the housekeeping department. Howard retired in 2007. Howard's greatest pride in life was his family and friends. He enjoyed spending time outdoors, doing various activities, especially fishing and camping. Howard was known as the family clown, his main goal in life was to make people laugh. Howard always had a smile on his face and took great pride in everything he did. He truly enjoyed the years of employment at Avera, he took pride in his job and all of his accomplishments throughout his life. He will be greatly missed. Howard passed away November 23, 2007. He reached the age of 60 years, 9 months, and 20 days. He is survived by his wife, Pauline of Green Valley; children, Steven (and Traci Jensen) of Green Valley, and Kimberly (and Matt DeVos) of Marshall; granddaughter, Kaitlynn Eve; mother, Evelyn of Marshall; mother-in-law, Rose Labat of Marshall; siblings, Donna (and Merle) Hess of Marshall, Shirley(and Gerald) Myhre of Tracy, Linda Ribera of Tracy, Cyril (and Hannahlore)of Yankton, SD, Bonnie (and Jim) Plehall of Sibley, IA, Deborah Serreyn of Marshall, Jeff Serreyn of Marshall, Cindy (and Doug) Nuese of Marshall, and Brain Serreyn of St. Leo; sister-in-law, Carol Serreyn of Marshall; and many nieces, nephews, aunts and uncles. He was preceded in death by his infant twins, Bradley and Brenda; father, Oscar; brother, Bob; nephew, Gabe; great niece; father-in-law, Henry Labat; brother-in-law, Randy Picht; and sister-in-law Janet Labat. Blessed Be The Memory of Howard Allen Serreyn

Howard Serreyn, age 60, of Green Valley died on Friday, November 23, 2007 at his residence. Funeral Services will be 10:30 A.M. Tuesday, November 27, 2007 at Holy Redeemer Catholic Church in Marshall. Burial will be at a later date in the Calvary... View Obituary & Service Information

The family of Howard Allen Serreyn created this Life Tributes page to make it easy to share your memories.

Send flowers to the Serreyn family.