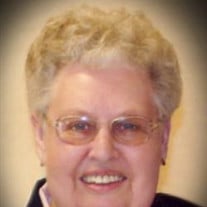 Marshall: Inez Fried, age 89, of Marshall, passed away at Avera McKennan Hospital in Sioux Falls on Wednesday, July 9, 2014. Funeral services will be 11:00 A.M. Monday, July 14th at First Lutheran Church. Visitation will be 4:00 P.M. to 8:00 P.M. with a 7:00 P.M. prayer service Sunday at the Hamilton Funeral Home. Visitation will continue at the church on Monday. Burial will be in the Marshall Cemetery. Inez Ruth Anderson Fried was born on April 8, 1925 to Albert Olaus Anderson and Alma Mae Chapel Anderson in Madison, Minnesota. She was the eleventh and last child born to the family. She attended Madison Schools and graduated in 1943. She worked as a waitress and grocery store clerk until 1948. She met Emanuel Fried, a young veteran who did farm work and was also a mechanic in the Madison area. They met at a dance in Odessa. She found him a handsome good dancer and he found her cute. They dated and married on January 23, 1949 in her sister's home in Marshall, MN. They had three children, Curt in '50, Gary in '54 and Bill in '56. Manny worked for Powell's Firestone Company while Inez worked for a variety of dry cleaning stores along with a number of her siblings. In the late '60s she began work as a sales associate for the JC Penney's store. She retired from Penney's after 22 years of employment primarily in the men's and boy's department. After Manny's death in 1999, Inez began volunteering at the senior center in Marshall. She loved to organize groups who would make various crafts at the Center. In 2010 she moved to Hill Street Congregate Living and continued volunteering for a variety of activities there. Inez was a generous and humble friend to many in the Marshall area. Whether she was quilting, knitting, sewing items or recycling greeting cards she looked forward to helping her family and friends make a happy and comfortable life. She passed through death into the arms of her Lord on July 9, 2014 after a short illness. She is survived by her three sons, daughter-in-laws, seven grandchildren, five great grandchildren and dozens of nieces and nephews throughout the area. She is preceded in death by her siblings: Pearl Zahn, Zatha Ellsworth, Lester, Alfred, Kenneth, Marvel Storlein, Delbert, Arlene Skogen, Elvin, and Orpha Peterson. Blessed the memory of Inez Fried.

The family of Inez Ruth Fried created this Life Tributes page to make it easy to share your memories.

Marshall: Inez Fried, age 89, of Marshall, passed away at Avera...

Send flowers to the Fried family.