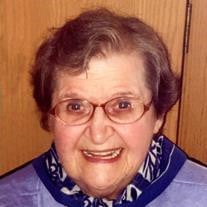 Ingrid Perry, age 85, of Marshall, Minnesota, died on Sunday, July 1, 2018, at Avera Morningside Heights Care Center in Marshall, Minnesota. Funeral services are 11:00 a.m. Friday, July 6, 2018, at the Hamilton Funeral Home in Marshall. Visitation will be held one hour prior to the service, from 10:00 – 11:00 a.m., on Friday at the Hamilton Funeral Home. Interment will be at 9:30 a.m., Tuesday, July 10, 2018, in the Union Liberty Cemetery, near Hallock, Minnesota. Ingrid Darlene Sjostrand was born on June 26, 1933, in Hallock, Minnesota, to Ole M and Helga (Hanson) Sjostrand. She was baptized and confirmed at the Covenant Community Church in Lake Bronson, Minnesota. She attended school there as well, graduating from high school in 1951. She was married to Archie Perry for 12 years and the couple had 2 children, Thomas and Lisa. Ingrid moved around a lot, living in California, Texas, Alaska, Nebraska, and Minnesota. While living in Thief River Falls, she worked at J.C. Penny and the local bread store. Ingrid went on to work at the Kittson County Museum in 1974. She became Director in 1976 and worked there until 1986. She moved to Texas in 1986 working as a book store manager for Parker College of Chiropractic. In 2001, Ingrid made her way North back to Minnesota, then to Iowa. When she needed more assistance with her daily care, she moved to Marshall in 2010 to live with Tom. Ingrid thoroughly enjoyed painting, spending many hours lost in creating art. She also enjoyed time spent with her children. She is survived by her two children; Thomas Perry of Marshall, Lisa (Ed) Miller of Ames, IA; brother, Willard (Joan) Sjostrand of Lindale, TX; nieces, nephews, other relatives, and friends. Ingrid was preceded in death by her parents; sister, Jewelle Balderston; and brother, Rodney Sjostrand. Blessed be her memory.

The family of Ingrid Darlene Perry created this Life Tributes page to make it easy to share your memories.

Send flowers to the Perry family.