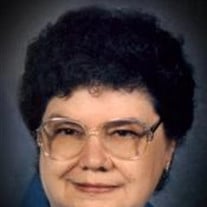 Marshall: Irene I. Benson, age 76, of Marshall, passed away at her residence on Thursday, March 21, 2013. Mass of Christian Burial will be 10:30 A.M. Monday, March25th at Holy Redeemer Catholic Church. Visitation will be 4:00 P.M. to 8:00 P.M. with a 7:00 P.M. prayer service followed by the Rosary Sunday at the Hamilton Funeral Home. Visitation will continue at the church on Monday, one hour prior to the mass. Irene Imogene Benson was born on April 6, 1936 in Sodus Township, Lyon County, Minnesota to parents Charles L. and Mary (Cauwels) DeMeyer. She was baptized, received First Communion and confirmed at Holy Redeemer Catholic Church. She graduated from Marshall High School. On June 27, 1959, Irene was united in marriage to Benny Benson in Marshall. They made their home in Marshall. They were blessed with three children, namely, Allen, Nancy and Mark. Irene worked at Woolworths and Metz Baking Company. She was blessed with a strong Catholic faith and was a lifelong member of Holy Redeemer Church. She was a member of the ladies guild and prayed daily. What made her happiest was cooking and baking for those she loved. She cherished her time spent with her family especially her grand children. Irene passed away suddenly at her home on Thursday, March 21, 2013. She had reached the age of 76 years, 11 months and 15 days. She is survived by her husband, Benny of Marshall; three children, Allen (Donna) Benson of Cottage Grove, Nancy (Ken) Ortmann of Marshall and Mark (Becky) Benson of Redwood Falls; seven grandchildren, Jordan (Tanya) Ortmann of Denver, CO, Ryan Ortmann of Marshall and wife Insun of Daegu, South Korea, Drew Benson of Cottage Grove, Sam, Nate, Tom and Emily Benson all of Redwood Falls; three great grandchildren, Konner, Samantha and Shea; two sisters, Regina DeMeyer of Slayton, Genny (Bill) Sammons of Marshall and one brother Albert DeMeyer of Slayton; two sisters-in-law and many nieces, nephews and friends. She was preceded in death by her parents and two brothers, Norbert and Edward DeMeyer. Blessed be the memory of Irene Benson.

The family of Irene Imogene Benson created this Life Tributes page to make it easy to share your memories.

Send flowers to the Benson family.