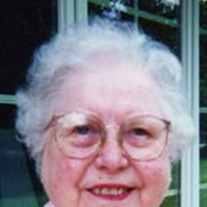 Marshall: Irene E. Hand, age 95, of Marshall, passed away at Avera Morningside Heights Care Center in Marshall on Saturday, September 4, 2010. Funeral services will be 10:30 A.M. Saturday, September 11, 2010 at Albright United Methodist Church in Marshall. Burial will be 2:00 P.M. in Worthington City Cemetery in Worthington. Visitation will be Saturday one hour prior to the funeral service. Condolences may be given at www.hamiltonfh.com. Irene Evelyn was born to Frans Gustaf and Mary (Carlson) Jacobson on March 13, 1915 in Nobles County, Minnesota. She was baptized and confirmed at the First Lutheran Church in Worthington. She attended rural school for eight years near her parents homestead and then continued school graduating from Worthington High School in 1933. Following graduation, Irene attended Bethesda Hospital School of Nursing in St. Paul where she received her Registered Nurse degree. On December 30, 1942, Irene was united in marriage to Francis M. Hand at the First Lutheran Church. Francis was in Military Intelligence which often required moving and Irene would work as a nurse. Some of the locations Irene worked were Oak Ridge, Worthington, and the Garfield Hospital in Washington, DC. They also resided in Virginia where Irene worked at Arlington County Public Library. In 1973 they moved to Marshall. Francis passed away on October 18, 1974. She joined Francis in death at the Avera Morningside Heights Care Center in Marshall on Saturday, September 4, 2010. She had reached the age of 95 years, 5 months and 22 days. Irene is survived by her three daughters, Patricia Hand of Marshall, Kathleen Hand-Bourgin of McLean, VA and Bonnie (Brian) Beatty of Vienna, VA; a grandson, Christian Hand-Bourgin; and many nieces, nephews and friends. Irene was preceded in death by her parents; four brothers, George, Russell, Clarence and Evrett Jacobson; and sisters, Ruby Anderson and Mable Jacobson. During her life, Irene enjoyed gardening, various arts and crafts, reading, and sending cards through her card ministry. Irene was a faithful member of Albright United Methodist Church where she was active in the Ladies Circle and Bible Study Club. She was also active in Christian Women’s Club and the Good Thoughts Study Club. Blessed Be The Memory Of Irene Hand

The family of Irene Evelyn Hand created this Life Tributes page to make it easy to share your memories.

Send flowers to the Hand family.