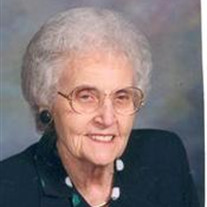 Marshall: Irene E. Verstraete, age 94, of Marshall, passed away at the Minneota Manor on Sunday, August 28, 2011. Mass of Christian Burial will be 11:00 A.M. Wednesday, August 31st at the Holy Redeemer Catholic Church in Marshall. Burial will be in the Calvary Catholic Cemetery. Visitation will be 4:00 P.M. to 8:00 P.M. with a 4:00 P.M. Rosary Service and a 7:00 P.M parish scripture service on Tuesday at the Hamilton Funeral Home. Visitation will continue at the church on Wednesday, one hour prior to the mass. Irene Elizabeth Kosse was born on April 13, 1917 near Tracy, Minnesota to parents Gerhard H. and Mary (Lingschiet) Kosse. She was baptized, received First Communion and confirmed at St. Mary’s Catholic Church in Tracy. On December 30, 1936, Irene was united in marriage to August “Gust” Verstraete at St. Mary’s Catholic Church. They lived in Tracy until moving to the Marshall area in 1961, Irene was a devoted wife and mother, and really enjoyed taking care of the grandchildren. Other enjoyments in her life were, the Birthday Club, the Card Club, volunteering at the nursing home and playing bingo. Gust passed away on September 21, 1982. Irene joined him in death at the Minneota Manor on Sunday, August 28, 2011. She had reached the age of 94 years, 4 months and 15 days. She will be missed by her five children, Janice (and John) Nelson of Slayton, Pat (and Nels) Myhre of Minneota, Dolores (and Dennis) Charbonneau of Parkers Prairie, Bob and Mary Verstraete of Hugo and Dean (and Sally) Verstraete of Minot, ND; sixteen grandchildren; 32 great grandchildren; four great great grandchildren; sister-in-law, Clara Andrews of Tracy; and brother-in-law, Roy Aschenbrener of Inver Grove Heights. She was preceded in death by her parents; husband Gust; daughter and son-in-law, Mary and Bill Huskamp; grandson, Dennis Verstraete; and great granddaughter, Brenna Hanson. Irene was a faithful member of Hoy Redeemer Church where she was active in the Marshall Council of Catholic Women, cooked for various church functions and was on the funeral committee for many years. Blessed be the memory of Irene E. Verstraete

Marshall: Irene E. Verstraete, age 94, of Marshall, passed away at the Minneota Manor on Sunday, August 28, 2011. Mass of Christian Burial will be 11:00 A.M. Wednesday, August 31st at the Holy Redeemer Catholic Church in Marshall. Burial will... View Obituary & Service Information

The family of Irene E. Verstraete created this Life Tributes page to make it easy to share your memories.

Send flowers to the Verstraete family.