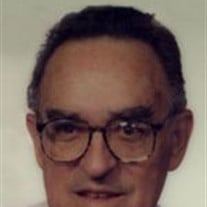 J. Leonard Harman, age 81, of Hanley Falls, passed at Avera McKennen Hospital in Sioux Falls on Tuesday, February 23, 2010. Funeral Services are scheduled for 1:00 P.M. Monday, March 1, 2010, at the Hamilton Funeral Home in Marshall. Burial will be in the Yellow Medicine Lutheran Cemetery in Hanley Falls. Visitation will be held two hours prior to the service, from 11 A.M. – 1 P.M. at the Hamilton Funeral Home. James Leonard Harman was born to Leonard and Lucy (Rawson) Harman on August 21, 1928 in Salt Lake City, Utah. He was raised in Granger, Utah. At age 8, he was baptized and confirmed as a member of The Church of Christ of Latter Day Saints. Leonard studied architecture at the University of Utah and then graduated in geology from Brigham Young University. Leonard later passed the architectural exam and was licenses in several states. On September 10, 1952, Leonard was united in marriage to Bette Huggins in the Salt Lake City Temple. They made their home in Salt Lake City, Utah until 1970 when they moved to Montevideo, Uruguay where he worked as the international architect for the LDS Church. Leonard moved to Morgan, Minnesota in 1989 and then to Hanley Falls in 1999. They returned to Montevideo, Uruguay to help build a new temple in 1999. Leonard took pride in his work and was still working on various projects when he passed away. Known as the “flying architect,” J. Leonard was a full time missionary for the LDS Church, holding many leadership positions including bishop, stake presidency and stake high council. He was very civic minded, serving wherever he was able. Among other roles, he served as president of Rotary and the Chamber of Commerce. He was a very musical person, serving in singing groups and military bands, playing the bass and saxophone. Leonard’s enjoyments in life included oil painting, construction, architecture, and spending time with family. He was an avid pilot and an Eagle Scout. Leonard reached the age of 81 years, 6 months and 3 days. He is survived by his wife, Bette of Hanley Falls; children, James Brent (and Pam) Harman of Houston, TX, Rhonda (and Randall) Bennett of Hanley Falls, Lisa (and David) Ricketts of Taylorsville, UT, Daniel L. (and Wendy) Harman of South Jordan, UT, and Nicole (and Kent) Maher of Winnemucca, NV; 36 grandchildren; 12 great-grandchildren; siblings, Clifford (and Betty Ann) Harman of Riverton, UT, Bonnie (and Brian) DeHaan of South Jordan, UT, Stephen (and Mariann) Harman of Salt Lake City, UT, and Joseph Harman of Bountiful, UT; also many other relatives and friends. He was preceded in death by his parents; daughter, Stacey Harman; three sisters, Cleo Evans, Beverly Ann Harman, and Jean Bready; brother-in-law, Alden Evans; and sister-in-law Mickey Harman. Blessed be the memory of J. Leonard Harman

The family of J. Leonard Harman created this Life Tributes page to make it easy to share your memories.

Send flowers to the Harman family.