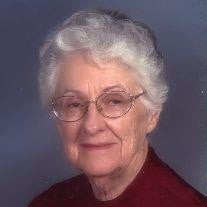 Jackie Zerr, age 87, of Marshall, Minnesota, passed away on Thursday, December 31, 2015, at Avera Regional Medical Center in Marshall, Minnesota. Mass of Christian Burial is 10:30 AM Saturday, January 9, 2016 at Holy Redeemer Catholic Church in Marshall. Interment will be later that day in the Calvary Catholic Cemetery. Visitation will be held from 4:00 – 8:00 PM Friday, January 8, 2016, at the Hamilton Funeral Home in Marshall. A family-lead rosary will be at 4:00 PM and a prayer service is scheduled for 7:00 PM. Visitation will continue one hour prior to the service, from 9:30 - 10:30 AM, on Saturday at the church. Clergy Officiating: Rev. Father Paul Wolf Casket Bearers: Justin Zerr, Darrin Zerr, Scott Buysse, Zachary Zerr, Leo Zerr, Marcus Richmond Jacqueline Harbison was born February 9, 1928, in Parke County, Indiana. She was the daughter of Donald and Margaret (Shalley) Harbison. Jackie graduated from Indiana University in 1950. On April 7, 1951, Jackie was married to Robert “Bob” Zerr. Together they raised seven children: David, Ginny, Jean, Lee Ann, John, Richard, and Susan. Bob’s career with Swift and Co. took them to different locations around the country. They spent the latter half of the Sixties in Douglas, Georgia. Jackie began teaching special education eventually becoming a lead teacher. She aided in the integration of her school system during the Civil Rights movement. Jackie was awarded a scholarship by the Coca Cola company to pursue a Master’s degree. This came at a time when the family was moving to Marshall, Minnesota, so she opted to further her education at South Dakota State University in Brookings, South Dakota. There she earned a Master of Arts degree in School Counseling. She then began teaching and counseling in the Marshall school district pursing her calling to education. Jackie was involved with many community organizations such as Countryside Council and Children’s Fire. She was a member and leader for MAFAC, Chaired the Minnesota Higher Education Coordinating Task Force on Instructional Technology, and was a co-founder of Community Quest. She was honored as Minnesota Counselor of the Year in 1990 and was inducted into the Pride in the Tiger Foundation’s Hall of Honor in 2003. Jackie enjoyed photography and playing bridge in her spare time. Another passion of Jackie’s was working in her greenhouse. She had a real talent and green thumb for growing tropical plants in the tundra of Minnesota. Jackie’s compassion, sense of humor, and thoughtful conversations will be missed by the community, her friends, and, especially, her family. Blessed be her memory. Jackie is survived by her six children, David (Anne) Zerr of Osakis, MN, Jean (Vince) Buysse of Hastings, MN, Lee Ann (Jeff) Richmond of Davis, CA, John (Dawn) Zerr of Marshall, MN, Richard Zerr of Marshall, MN, Susan (Dean) Capouch of Fergus Falls, MN; 12 grandchildren, Stephanie (John) Beck, Justin Zerr (Tayler Scholz), Darrin (Joy) Zerr, Scott (Jenny) Buysse, Zachary (Christine) Zerr, Jamie (Steve) Lehrke, Jackie (Jamie) Bobholz, Kelly Richmond, Laura Zerr (Seth Ruesink), Taylor Amberg, Leo Zerr, Marcus Richmond; 6 great-grandchildren; brother, Cy Harbison of Rockville, IN; nephews, nieces, other relatives and many friends. Jackie was preceded in death by her parents, Donald and Margaret Harbison; husband, Bob Zerr; daughter, Virginia Bastyr; infant son, Douglas Zerr; brother, Donnie Harbison; and sister, Joann Lewis. The family invites everyone to the Carlin Hall following mass for a luncheon.

The family of Jackie Zerr created this Life Tributes page to make it easy to share your memories.

Jackie Zerr, age 87, of Marshall, Minnesota, passed away on Thursday,...

Send flowers to the Zerr family.