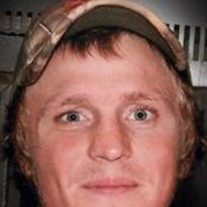 Marshall: Jacob D. “JD” Westberg, age 22, of Sioux Falls, formerly of Marshall, passed away in Sioux Falls on Monday, October14, 2013. Funeral services will be 1:00 P.M. Saturday, October 19th at the Hamilton Funeral Home. Visitation will be 4:00 P.M. to 8:00 P.M. with a 7:00 P.M. prayer service Friday and continue at the funeral home on Saturday, one hour prior to the service. Condolences may be given to www.hamiltonfh.com. Jacob Daniel “JD” was born on October 25, 1990 in Marshall to Gary R. and Wendy S. (DeVries) Westberg. He was baptized and confirmed at St. Stephen Lutheran Church in Marshall. He was on the wrestling team and graduated from Marshall High School. He also was in Boy Scouts and Kick It youth group. The love of JD’s life is his daughter Avarie and is really proud of being a dad. JD was a little brother to all who knew him. He loved wrestling around with his nieces. All his family is very important to him. His hobbies and enjoyments include hunting, fishing, camping, working on demo cars and motor sports. His is loved and sadly missed by his father and mother, Gary and Wendy Westberg of Marshall; daughter, Avarie and her mother, Samantha Bates of Lincoln, NE; brothers, Michael (and Stephanie) of Marshall, Kasey (and Krystal) of Marshall and Matthew of Sioux Falls; grandmother, Char Westberg of Marshall; aunts and uncles, Linda Curry of Marshall, Ken (and Jane) DeVries of Ghent, Lydell DeVries of Lynd, Cheryl (and Don) Patterson of OK, Tim DeVries of Marshall, Sue Sik of Marshall, Laurie (Brett) Boon of Marshall, Jerry Westberg of Tracy and Shelly (and Chad) Rykhus of Marshall; nieces, Madison, Skylar, Kaelyn, and Sophia Westberg, and Audrey Haney; also lots of cousins. He was preceded in death by grandfathers, Marvin DeVries and Roy Westberg; grandmother, Laura DeVries; cousin, Chelsea Boon; uncle, Bill Curry, aunt, Julie Westberg; and great grandparents. JD’s life ended abruptly. He is a great dad, son, brother, uncle, cousin and friend, and will be missed dearly by all his loved ones. Bless be his memory

The family of Jacob Daniel "JD" Westberg created this Life Tributes page to make it easy to share your memories.