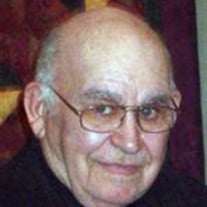 Jacob C. Newton, age 80, of Russell, passed away Monday, February 8, 2010 at the Murray County Hospital. Funeral services will be 10:30 A.M. Saturday, February 13, 2010 at the Grace First Parish in Russell. Burial will be in the Florence City Cemetery. Visitation will be 4:00 P.M. to 8:00 P.M. with a 7:00 P.M. prayer service Friday at the Hamilton Funeral Home. Visitation will continue at the church on Saturday, one hour prior to the service. Condolences may be sent to www.hamiltonfh.com. Jacob Charles Newton was born to Charles and Bird (Meyer) Newton on February 11, 1929 in Tyler, Minnesota. He graduated from the Russell High School in 1947. Jacob was baptized at and a member of Opdahl Lutheran Church in Florence until the church closed. Jacob is a member of the Grace First Parish in Russell. On March 5, 1951, Jacob was united in marriage to Joyce Johnson. They farmed the family farm near Florence for a couple of years then Jacob went to work for Marshall Produce in 1954. In 1963 they moved to Russell and lived there until 1979, Jacob and Joyce then moved to Howard Lake. He worked for Sonstegard Foods until 1996 when he retired and moved back to Russell. Jacob has worked part-time at Running’s for the past eleven years. Jacob passed away at the Murray County Hospital in Slayton on Monday, February 8, 2010. He had reached the age of 80 years, 11 months and 28 days. He is survived by his wife, Joyce of Russell; six children, Kathryn (Tom) Staniszewski of Aurora, SD, Julie Roby of Marshall, Criss (Rhonda) Newton of Tyler, Dana (Becky) Newton of Newton, KS, Eric (Victoria) Newton of Chanhassen and Jill (Lane) Petersen of Tyler; fourteen grandchildren, Melanie Staniszewski, Rhea Staniszewski, Neil Staniszewski, Scott Staniszewski, Darren Thovson, Brooks Newton, Brett Newton, Taylor Newton, Emily Newton, Elliot Newton, Ava Newton, Kaitlin Petersen, McKensie Petersen, and Rhaegyn Petersen; also many other relatives and friends. He was preceded in death by his parents; three daughters, Barbara Marie, Peggy Sue Anne and Infant Daughter Newton; two grandsons, Jeremy Thovson and Matthew Roby; and sister, Betty Oldenburg. Jacob’s love of his life was his family and especially being with and watching his grandchildren’s various activities. Other enjoyments were hunting, fishing, outdoor activities including raising exotic animals and watching RTR basketball. Jacob loved to visit, he always made time to stop and talk, share a story with a friend and everyone was his friend. All who knew Jacob will remember his helping spirit, positive attitude and smile. Blessed be the memory of Jacob Newton

Jacob C. Newton, age 80, of Russell, passed away Monday, February 8, 2010 at the Murray County Hospital. Funeral services will be 10:30 A.M. Saturday, February 13, 2010 at the Grace First Parish in Russell. Burial will be in the Florence City... View Obituary & Service Information

The family of Jacob Charles Newton created this Life Tributes page to make it easy to share your memories.

Send flowers to the Newton family.