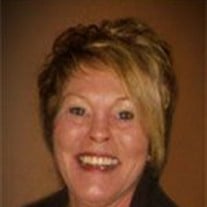 Marshall: Jacquelyn “Jackie” F. Meyer, wife of Arlen Meyer, of Marshall, passed away suddenly at her home on Friday, May 7, 2010 at the age of 51. Funeral services will be 2:00 P.M. Tuesday, May 11, 2010 at the Christ Evangelical Lutheran Church. Visitation will be 4:00 P.M. to 8:00 P.M. Monday with a 7:00 P.M. prayer service at the Hamilton Funeral Home. Visitation will continue at the church on Tuesday, one hour prior to the service.Jacquelyn “Jackie” Faye was the seventh of seven children born to Tom and Gladys (Penhale) Grogan on September 11, 1958 in Marshall, Minnesota. She was baptized, received First Communion, and confirmed a Holy Redeemer. She attended parochial school at Holy Redeemer and was a 1977 graduated of the Marshall High School. She went to attend Willmar Junior College where she studied Cosmetology. On September 2, 1978, Jackie was united in marriage Arlen Meyer who was raised in Vesta. To this union two daughters were born, namely; McKenzie and Whitney. The love of Jackie’s life was her family and friends. She loved being a wife, mom and nana. Her other enjoyments included dancing, shopping and her animals. Jackie passed away at her home in Marshall on Friday, May 7, 2010. She had reached the age of 51 years, 7 months and 27 days. She leaves behind her loving husband, Arlen of Marshall; two daughters, McKenzie (and Jon) Vandelanotte of Aberdeen, SD and Whitney (and Zeb) Frauendienst of Marshall; two grandchildren, Eli and Reese Vandelanotte; four sisters, Mary (and Jon) Steinfelt of Roseberg, OR, Patty (and Ron) Driessen of Marshall, Kathy Fox of Burnsville, and Janice (and Bob) Harrison of LeSueur; many nieces and nephews; many great nieces and nephews; as well as a loving family of in laws and a legion of friends. She was preceded in death by her parents; a brother, Larry Grogan; and a sister, Sharon Regnier. Jackie well be dearly missed. Blessed Be The Memory Of Jacquelyn “Jackie” Faye Meyer

The family of Jacquelyn Fay Meyer created this Life Tributes page to make it easy to share your memories.

Send flowers to the Meyer family.