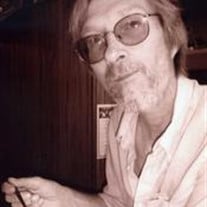 Marshall: James E. Dahl, age 54, of Marshall, passed away at the Avera Mckennen Hospital in Sioux Falls on Saturday, August 18, 2012. Funeral service will be 2:30 P.M. Thursday, August 23rd at First Lutheran Church in Marshall. Visitation will be 6:00 P.M. to 8:00 P.M. with a 7:00 P.M. prayer service Wednesday at First Lutheran Church and will continue at the church on Thursday, one hour prior to the service. Burial will be in the Marshall Cemetery. The Hamilton Funeral Home is in charge of the arrangements. James Edward Dahl was born January 24, 1958 in Watertown, SD to Warren and Wanda (Homme) Dahl, He was the youngest of five children. He moved with the family to Marshall, MN in 1973 where he graduated from high school. He took various art and related courses at Southwest State University, but was otherwise self-taught in his artistic pursuits. He worked at Happy Chef while in High School and at Henle Printing, Schwan’s Print Shop, and Patzer’s Hardware and was commissioned for various art projects. Jim was an accomplished artist in mixed media, selling artwork across the country. He was invited to exhibit his work at the Minneapolis Institute of Art in 1989 and sold through Icebox Galleries in the Twin Cities area as well as Marshall Area Fine Arts Gallery. He was most recently commissioned for the Mrs. Whitney Statue project which was a culmination of his earlier dream to honor Marshall’s founders. He was passionate about his art, cared deeply for his friends and family, encouraged the artistic efforts of others, and granted glory to God for his talents. He played harmonica frequently and loved to balance rocks and stones. Survivors include his mother, Wanda Dahl of Marshall, MN, four siblings; Wayne Dahl of Penguin, Tasmania, Australia, Lynn (Val) Sulackow of Rice Lake, WI, Hazel (Steve) Behrens of Hazen, ND, Mark Dahl and Laura Brothers of Anchorage, Alaska; and ten nieces and nephews. He was preceded in death by his father, Warren H. Dahl, and a brother-in-law, Valentine Sulackow. In lieu of flowers the family requests that memorial contributions go to the Marshall Area Fine Arts Council (MAFAC) toward the Mrs. Whitney Statue project. Blessed be the memory of Jim Dahl.

The family of James Edward Dahl created this Life Tributes page to make it easy to share your memories.

Send flowers to the Dahl family.