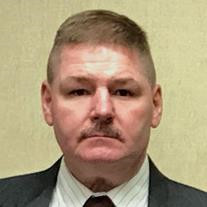 Jim Goslar, age 54, of Des Moines, Iowa, died on Thursday, August 23, 2018, at his home in Des Moines. Memorial Services are 1:00 p.m. Saturday, September 29, 2018, at the Hamilton Funeral Home in Marshall. Following a reception, Interment will be in the Marshall Cemetery. Visitation will be held one hour prior to the services, from 12:00 – 1:00 p.m. on Saturday at the Hamilton Funeral Home. James Bradley Goslar was born on May 28, 1964, in Marshall, Minnesota, to Donald Sr. and Shirley (Arndt) Goslar. He attended Lynd Public Schools through the 8th grade and then attended Marshall High School until his graduation in May 1982. Jim joined the United States Marine Corps in June of 1982 and served until he was honorably discharged in June of 1986. On October 9th, 1982, he married Beverly Susan Juhl and together they had two children: Joshua and Tasha. They were married for 33 years. Jim and Bev moved back to Minnesota where he worked for Lyon County Co-Op in Marshall until 1993. From there they moved to Cherokee, Iowa, where Jim worked at Love Tire Shop/Graham Tire until purchasing Quinn’s Service and Quinn’s Liquor and Wine in March of 1998. After closing the business in April 2007, Jim then was employed at American Natural Soy, Hirschman Auto, and then Holzhauer’s in Cherokee. Jim moved to Des Moines, Iowa, in May 2017 and was employed at Kum N’ Go until the time of his death. Jim enjoyed hunting, fishing, gunsmithing, and reloading. He is survived by Beverly Juhl and his children, Joshua Goslar and Tasha Goslar; siblings, LeRoy Goslar, Donna (Larry) Swanson, and Donald Jr. (Jean) Goslar; and several nieces and nephews. Jim was preceded in death by his parents; Donald Sr. and Shirley Goslar.

The family of James Bradley Goslar created this Life Tributes page to make it easy to share your memories.

Send flowers to the Goslar family.