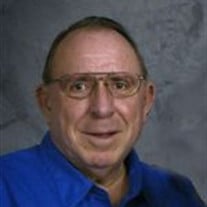 James Hensel, age 65, of Milroy, passed away on Monday, August 25, 2008, at the Avera Hospital in Sioux Falls, SD. Funeral Services are planned for 10:00 AM on Thursday, August 28, at Our Savior's Lutheran Church in Milroy. Visitation will be held from 5 to 8 P.M. on Wednesday, August 27, at the Hamilton Funeral Home in Marshall. Visitation will continue one hour prior to the services on Thursday, at the church. Burial will follow the funeral and will be in Memorial Cemetery in LeMars, IA at approximately 3:30 PM. James Carl Hensel was born on December 8, 1942, to William and Anna (Reisen) Hensel in Sioux City, Iowa. He worked as a contractor supplier until his medical retirement in 1990. Jim and Donna lived in LeMars, Iowa for 18 years before moving to Milroy. He was a Boy Scout leader for 15 years. He was a proud member of Three Flats and a Spare, a band out of Milroy. Jim was also a member of the Milroy Lion’s Club and a faithful member of Our Savior’s Lutheran Church. His other enjoyments included fishing, camping, cooking and smoking meat, gardening, canning, and having morning coffee with the guys. He loved spending time with his family and friends. Jim was endlessly proud of his children and lived to spend time with his grandson. Jim passed away on Monday, August 25, 2008. He reached the age of 65 years, 8 months and 17 days. He is survived by his wife, Donna Hensel of Milroy; children, William (and Autumn) Hensel of San Diego, CA, and Julie (and Kyle) Peterson of Alexandria; grandson, James Lokela; and siblings, Sharlyn Iverson of Dakota City, NE, Amber (and Dan) Boettcher of Akron, IA, and William Carl of Sioux City, IA. Jim was preceded in death by his parents, William and Anna. Blessed Be The Memory of Jim Hensel.

James Hensel, age 65, of Milroy, passed away on Monday, August 25, 2008, at the Avera Hospital in Sioux Falls, SD. Funeral Services are planned for 10:00 AM on Thursday, August 28, at Our Savior's Lutheran Church in Milroy. Visitation will... View Obituary & Service Information

The family of James Carl Hensel created this Life Tributes page to make it easy to share your memories.

James Hensel, age 65, of Milroy, passed away on Monday, August...

Send flowers to the Hensel family.