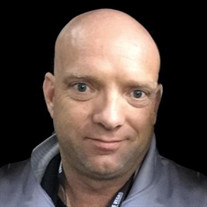 James Miller, age 47, of rural Marshall, Minnesota, died unexpectedly on Tuesday, February 25, 2020, at the Avera Marshall Regional Medical Center in Marshall. Funeral services are 11:00 a.m. Tuesday, March 3, 2020, at Trinity Lutheran Church in Balaton, Minnesota. Interment will be in the Trinity Lutheran Cemetery. A reception will follow for attendees at trū Shrimp in Balaton. Visitation will be held from 4:00 – 8:00 p.m. Monday, March 2, at Trinity Lutheran Church in Balaton, Minnesota. A Prayer Service is scheduled for 7:30 p.m. and a time to share memories will follow. Visitation will then continue one hour prior to the service, from 10:00 – 11:00 a.m., on Tuesday, at the church. James Louis Miller was born on August 26, 1972, to parents Lewis and Shari (DeGroot) Miller in Marshall, Minnesota. He was baptized as an infant and was later confirmed in his youth at Sillerud Lutheran Church, near Balaton, Minnesota. He attended school in Balaton and was proud to graduate high school with the class of 1991. Jim then went to work and farmed in the area. In 1993, Jim was married to Mary Jo Wigen for a few years before her death in 1996. Jim moved into Balaton where he continued to work while raising his 2 boys. 20 years later, Jim’s family was complete when he married Rachel Goodmund and gained 3 more children to their blended family. Jim and Rachel just celebrated their 3rd anniversary. Jim spent many years working the land and driving his Peterbilt. For more than 12 years, He drove truck and farmed at T & J Trucking & Farms in Balaton. Jim currently was working for ADM in Marshall. He was active with the Balaton Fire and Ambulance for over 20 years, an active church member at Trinity Lutheran Church, and a regular at the Benson Coffee Crowd. He was faithful to his children’s activities, rarely missing an event. He loved talking to people, he could carry on a conversation with anyone and if you happened to have an encounter with him, more than likely you left with a nickname as Jim had one for everybody. As founder of the “Lawn-care Committee,” Jim was meticulous about his, and others, lawns, enjoyed golfing, and took many trips with Rachel. Jim was also well known to have an unmatched library of useless trivia and dumb jokes at the ready. Jim was often found in the “as seen on TV” aisle at the local stores or cheering on the SMSU men’s basketball team. James Miller died on February 25, 2020, in Marshall, Minnesota. Gone too soon at the age of 47 years, 5 months, and 30 days. Blessed be his memory. Jim is survived by his wife, Rachel Miller of rural Marshall; 5 children, Jesse Miller of Balaton, Zachary Miller (Raven “Black Bird” Leal) of Southern Pines, NC, Malinda Lemburg (and special friend Nick Mitchell) of rural Marshall, MaKala Lemburg of rural Marshall, Parker Lemburg of rural Marshall; parents, Lewis (Linda) Miller of Dawson, Shari DeGroot of Omaha, NE; siblings, Todd (Joan) Miller of Balaton, Mary (Brent) Dougherty of Omaha, NE, Lori Miller; nieces and nephews, other relatives, and many friends. He is preceded in death by his maternal grandparents, Lloyd & Louise Converse; paternal grandparents, Louis and Mildred Miller; and a brother, Chad Henry Miller. In lieu of flowers, memorials are preferred to the Balaton Fire Department or the Trinity Lutheran Cemetery Association.

The family of James Louis Miller created this Life Tributes page to make it easy to share your memories.