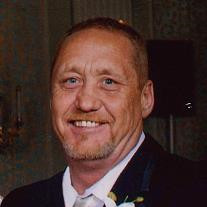 James Lee Morgan, age 54, of Marshall, Minnesota, passed away on Sunday, December 4, 2016, at the Avera Marshall Regional Medical Center. Funeral Services are 10:00 AM Thursday, December 8, 2016, at Lake Sarah Lutheran Church in Garvin. A reception will follow at the church. Interment will be at 5:00 PM in the Bethany Cemetery, near Lake Shetek. Visitation will be held from 4:00 – 7:00 PM Wednesday, December 7, 2016, at the Hamilton Funeral Home in Marshall. Visitation will continue one hour prior to the service, from 9:00 – 10:00 AM, on Thursday at the church. Clergy Officiating: Rev. Drake M. Snell Organist: Mary Hauschild Congregational Hymns: Amazing Grace / Old Rugged Cross Honorary Casket Bearers: Teddy Haugen, Jeremy Haugen Active Casket Bearers: Cody Morgan, Ted Haugen, Gordy Morgan, Tyler Morgan, Gary Irwin, Bryan Haugen James Lee Morgan was born on September 26, 1962 in Tracy, Minnesota. He was the son of Lee Morgan and Donna Wirtjes. Jim was baptized as an infant and was confirmed in his youth at Lake Sarah Lutheran Church in Garvin. He grew up with his aunt and uncle and attended school in Tracy and Marshall, graduating with the Marshall High School class of 1981. Jim went on to live in Ghent. Jim had 3 children: Briana, Cody, and Cassie. He worked for Ted and Sharon Haugen and he also drove truck for Southwest Sanitation. Jim moved to Marshall in 1999 where he loved spending time with his family. Jim's life was centered around his grandkids. He was a devoted "Papa" and loved them beyond measure. Jim spent most of his days caring for them and building memories his grandchildren will forever cherish and hold onto. Many memories were made fishing at the lake and taking annual trips to Minneapolis to watch the New York Yankees take on the Minnesota Twins. Go Yankees! Jim died on Sunday, December 4, 2016, in Marshall, Minnesota at the age of 54 years, 2 months and 8 days. Blessed be his memory. Jim is survived by his children, Briana Morgan of Marshall, Cody (and Jordan) Morgan of Princeton, IL, Cassie Morgan of Marshall; 3 grandchildren, Jaylah Pehrson, Payton Morgan, Noah Morgan; brothers, Gordy Morgan of Anchorage, AK, Randy Drown of North Dakota; special aunt and uncle, Ted and Sharon Haugen of Lake Shetek; nephews, nieces, other relatives and friends. He was preceded in death by his parents, Lee Morgan and Donna Wirtjes. The family invites attendees to a reception immediately following the service. Burial will be at 4:30 PM at Bethany Cemetery, near Lake Shetek. Arrangements by the Hamilton Funeral Home in Marshall, Minnesota. 507-532-2933 Guest book and tribute wall available online at www.hamiltonfh.com.

The family of James Lee Morgan created this Life Tributes page to make it easy to share your memories.

Send flowers to the Morgan family.