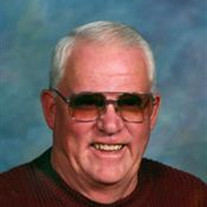 Marshall: James “Jim” Thompson, age 69, of Marshall, passed away at the Sanford Medical Center in Sioux Falls on Wednesday, June 15, 2011. A memorial service will be held at 5:00 P.M. Saturday, June 18th at Wesley United Methodist Church. Burial will be in the Marshall Cemetery. Visitation will be one hour prior to the service. The Hamilton Funeral Home is in charge of the arrangements. James “Jim” Thompson was born on January 5, 1942 in Amelia, Virginia to Simon and Myrtle (Lynn) Thompson. He grew up in the country near Amelia, working at a dairy farm. At the age of 15, Jim and his brother moved to Minnesota. He graduated from the Marshall High School in 1962. He worked for Longtins Skelly station and the City of Marshall, retiring in 2002. He was married to Carolyn Pequin and had a son, James. He was later married to Joanne (Goslar) Roberts in 1976. Jim’s love of his life was his family. He also was an avid sports fan, watching thousands of hours of football, baseball and basketball and umpiring many baseball games. He loved playing horseshoes and bowling and volunteered for many organizations. On weekends you could find him at an auction or garage sale always looking for another treasure. Jim passed away at the Sanford Medical Center in Sioux Falls on Wednesday, June 15, 2011. He had reached the age of 69 years, 5 month and 10 days. He is survived by his wife, Joanne of Marshall; step sons, Mike (Dori) Roberts of Marshall, Dave (Carol) Roberts of Aurora, CO, Mark Roberts of Marshall; and grandchildren, Nick (Michelle), Alicia, Breanna and Jacob Roberts; great grandchildren, Kylie, Treyton and Brennen Roberts; and along with the children of his son, James Dean Meiners, Ketrah, Kelby, Kenzie, Caitlin, Derrick and Adaya. He was preceded in death by his parents; son, James Dean Meiners; step son, Douglas Roberts; sister, Shirley Clark; and sister-in-laws, Shirley Goslar and Marie Engebretson. Blessed Be The Memory Of Jim Thompson.

The family of James "Jim" Nelson Thompson created this Life Tributes page to make it easy to share your memories.