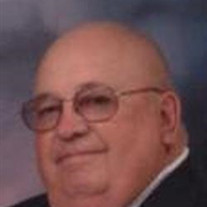 Marshall: James J. Welsh, age 85, of Marshall, passed away at the Prairie Home Hospice House on Wednesday, May 7, 2014. Mass of Christian Burial will be 10:30 A.M. Monday, May 12th at Holy Redeemer Catholic Church. Visitation will be 4:00 P.M. to 8:00 P.M. with a 4:00 P.M. rosary service followed by a 5:00 P.M. prayer service Sunday at the Hamilton Funeral Home. Visitation will continue at the church on Monday, one hour prior to the service. Military honors will be furnished by the American Legion. Burial will be in St. Eloi Catholic Cemetery in Ghent. James Joseph was born on January 20, 1929 in Olivia, Minnesota to Walter and Mathilda (Prokesch) Welsh. He was baptized, received First Communion and confirmed at St. Mary’s Catholic Church in Bird Island. He graduated from Bird Island High School in 1947. He served in the United States Navy from 1950 to 1953. On May 26, 1951, Jim was united in marriage to Adeline Rose Uthe at St. Mary’s Catholic Church. To this union four children were born, namely, Kent, Tom, Paula and Jamie. Jim drove truck delivering culverts for a few years, and then worked at the grain elevator in Bird Island. He went to work for the Peavey Elevator in New Ulm and then to the Peavey Elevator in Ghent which he eventually purchased. The love of his life was doing and being with his family. His enjoyments were coin collecting, raising Boston Terriers, stock car racing, playing cards and singing at various events. He was a faithful member of Holy Redeemer Catholic Church, the Resurrection Choir and the Knights of Columbus. He also was a member of the Ghent American Legion. He is survived by his four children, Kent (Sharon) of Cedar Hill, TX, Tom (Cindy) of Ghent, Paula (Doug) Schlorf of Montrose, MI and Jamie of Marshall; nine grandchildren, Kimberly Welsh, Robyn Welsh-Kirby, Anthony Welsh, Nate Welsh, Travis Welsh, Teresa DePestel, Shane Schlorf, Brittney Johnstin and Josh Schlorf; 18 great grandchildren; eight siblings, Jeanette Larson of Bird Island, Myrt (Les) Prechet of Bird Island, Charlene Thole of Bird Island, Walter “Bud” Jr. (Sylvia) of Bird Island, Larry (Sara) of Bird Island, Ronnie (Myrna) of Olympia, WA, Carol (Johnny) Norris of Pueblo, CO and Russ (Donna) of Rochester; also many other relatives and friends. He was preceded in death by his parents; wife, Adeline (March 11, 2005); and two brother-in-laws, Paul Larson and Ray Thole. Blessed be the memory of James J. Welsh

Marshall: James J. Welsh, age 85, of Marshall, passed away at the Prairie Home Hospice House on Wednesday, May 7, 2014. Mass of Christian Burial will be 10:30 A.M. Monday, May 12th at Holy Redeemer Catholic Church. Visitation will be 4:00... View Obituary & Service Information

The family of James Joseph Welsh created this Life Tributes page to make it easy to share your memories.

Send flowers to the Welsh family.