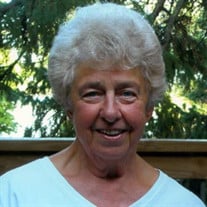 Janice Lange, age 80, of Deerwood, formerly of Hutchinson and Russell, peacefully passed away on Thursday, August 12, 2021, at her home surrounded by her family. Funeral Services are 11:00 a.m. Wednesday, August 18, 2021, at Grace First Parish in Russell, Minnesota. Interment will follow in the Russell Cemetery. Visitation will be held from 10:00 a.m. until the time of service at 11:00 a.m. on Wednesday, August 18, 2021, also at the church. In lieu of flowers, the family requests memorial donation be made out to the family for use at a future designation. Janice Pauline Arndt was born to Henry and Josephine Alvena Arndt on April 1, 1941, in Tyler, Minnesota. She graduated from Russell High School in 1959. Janice then went on to receive her degree from the University of Minnesota in 1960. On August 31, 1963, she married her high school sweetheart, Larry Lange. The couple raised two daughters, Cheryl and Darcy, and one son, Greg in Hutchinson, Minnesota. Janice was excited to begin her career as a food service supervisor at the Sioux Valley Hospital in Sioux Falls, South Dakota. Once married, Janice and Larry moved to Hutchinson, when he became employed by 3M. Janice found great joy in managing the S&H Green Stamp Redemption Center and the Credit Bureau of Hutchinson, however, her happiest moments were when she raised her three children as a stay-at-home mom. Janice’s family was the center of her life, and the love Janice had for them was profound. That love grew even deeper when she became “Grandma” to her eight grandchildren. Janice was so proud of each of them and all of their accomplishments. She loved hosting family gatherings and enjoyed teaching them the concept of “Families that play together, stay together”. She loved the “Lake Life” and enjoyed summer weekends at their cabin so much that in 1999, they purchased the property next to their cabin. In 2001, Janice and Larry permanently moved to the lake home they had built by hand on Bay Lake in the Deerwood area. She enjoyed camping, traveling around the state, country, and world, going for walks, bike and pontoon rides, as well as playing in the lake with her grandchildren. She looked forward to the monthly bridge club evenings with her friends. Janice was an active member of Vineyard United Methodist Church in Hutchinson by serving on several committees and singing in the choir. She was passionate about music, especially playing the piano, and instilled that love into her children and grandchildren. On Thursday, August 12, 2021, Janice Pauline Lange, loving wife, mother of three, and grandmother of eight, peacefully passed away at her home surrounded by family. She had reached the age of 80 years, 4 months, and 11 days. Blessed be her memory. Janice is survived by her loving and faithful husband, Larry; daughter, Cheryl Kuz and her children: Annika, Conrad and Kirsten of Ada, MI; daughter Darcy (Tyler) Oberdeck and their children: Emily and Tim of Mound; son, Greg (Patricia) and their children: Josie, Dylan and Riley of Chaska; her brothers, Mike (Jane) Arndt of Watertown, Tom (Betty) Arndt of Verndale; along with many nieces, nephews and extended family around the state and country. Janice was preceded in death by her parents, Henry and Alvena Arndt of Russell; brother Conrad Arndt of Marshall; infant sister Mary Louise Arndt of Russell; and sister Susan Washtock of Bloomington.

The family of Janice Pauline Lange created this Life Tributes page to make it easy to share your memories.

Janice Lange, age 80, of Deerwood, formerly of Hutchinson and...

Send flowers to the Lange family.