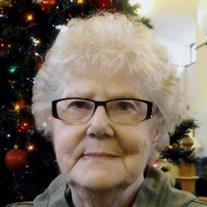 Janice LaVonne Thompson, age 78, of Minneota and formerly of Marshall, Minnesota, passed away on Sunday, March 6, 2016, at the Minneota Manor Care Center. Memorial Services will be held privately. Interment will be in the Memorial Hill Cemetery, Lake Benton, Minnesota. Clergy Officiating: Rev. Scott Fuller Honorary Urn Bearers: Holly Strehlow, Abby Stickel, Megan Erschens Janice LaVonne Mitchell was born on February 7, 1938, in Diamond Lake Township, Minnesota. She was the daughter of Walter and Martha (Nielsen) Mitchell. Jan was baptized as an infant and confirmed in her youth at the Diamond Lake Lutheran Church. She attended school in Lake Benton. Jan spent her early years caring for her family and raising her children: Carol, Curtis, and Mary Lou. In 1986, Jan moved to Marshall where she worked for the Super 8 Hotel, McDonalds, and HyVee. She was also a member of First Lutheran Church in Marshall. When her health failed and she needed more assistance with her daily care, Jan moved to the Minneota Manor in December of 2010. Jan’s enjoyment in life revolved around her children and grandchildren. She was always interested in updates and photos from Holly, Abby, and Megan. Janice Thompson passed away peacefully on Sunday, March 6, 2016 at the age of 78 years and 28 days. Blessed be her memory. She is survived by her daughter, Carol (and Alan) Erschens of Grimes, Iowa; 3 granddaughters, Holly (and Jeremiah) Strehlow of North Liberty, Iowa, Abby (and Joe) Stickel of Waukee, Iowa, Megan Erschens of Grimes, Iowa; 5 great-grandchildren, Michael, Kailey, Skylar, Gweneth, Lydia; nephews, nieces, other relatives and friends. Jan is preceded in death by her parents, Walter and Martha Mitchell; son, Curtis Thompson; daughter Mary Lou Thompson; granddaughter, Stacy Erschens; brother, Erwin Mitchell; and a brother in infancy.

Janice LaVonne Thompson, age 78, of Minneota and formerly of Marshall, Minnesota, passed away on Sunday, March 6, 2016, at the Minneota Manor Care Center. Memorial Services will be held privately. Interment will be in the Memorial Hill Cemetery,... View Obituary & Service Information

The family of Janice LaVonne Thompson created this Life Tributes page to make it easy to share your memories.

Janice LaVonne Thompson, age 78, of Minneota and formerly of...

Send flowers to the Thompson family.