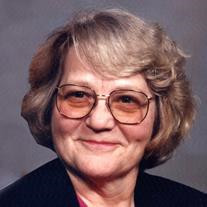 Jayne Bleloch, age 83, of Marshall, Minnesota, died on Friday, October 19, 2018, at Morningside Heights Care Center in Marshall. Memorial Services are 2:00 p.m. Monday, November 5, 2018, at Cornerstone United Methodist Church in Marshall. Interment will follow in the Marshall Cemetery. Visitation will be held one hour prior to the service, from 1:00 – 2:00 p.m., on Monday at the church. Jayne Carole Beard was born on January 29, 1935, in Republic, Ohio. She was the daughter of James and Martha (Baker) Beard. Jayne was baptized as an infant in the Methodist Church in Republic. She graduated from Scipio Republic High School in 1953 and from Heidelberg College in Tiffin, Ohio in 1957. Jayne continued her education at the University of Florida before earning her master’s degree in science at The Ohio State University in 1967. Jayne worked as a microbiologist for the Food and Drug Administration in Cincinnati, Ohio and it was there that she met Mr. Donald Bleloch. On August 16, 1969, Jayne and Don were married at the United Church of Christ Church in Republic, Ohio. The couple moved to Chicago for several years where Jayne continued to work for the Food and Drug Administration where she was honored with several awards for outstanding work in her field of microbiology. Jayne and Don settled in Marshall 32 years ago, and Jayne continued her career as a microbiologist and taught at Southwest State University in Marshall. Jayne was an intentional person with a strong faith. She was a member of the Order of the Eastern Star and Cornerstone United Methodist Church in Marshall. Jayne enjoyed playing cards, needle point, crafts, reading, her pet dogs, and wintering at South Padre Island, Texas. Jayne Bleloch went to her heavenly home on Friday, October 19, 2018, at the age of 83 years, 8 months, and 20 days. Blessed be her memory. She is survived by her sister, Janet (John) Elchisco of Republic, OH; niece, Jenifer (Wade) Bayer of Bloomville, OH; sister-in-law, Eleanor Bleloch of Marshall, great-nephew, Aaron Bayer of Worthington, OH and great-niece, Michelle (Thom) Hooper of Belleville, IL., and many wonderful friends. She is preceded in death by her parents, James and Martha Beard; husband, Donald Bleloch; and nephew, John C. Elchisco.

The family of Jayne Carole Bleloch created this Life Tributes page to make it easy to share your memories.

Send flowers to the Bleloch family.