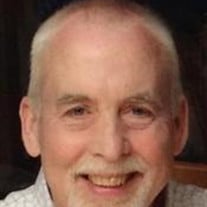 MARSHALL - Funeral services for Jeff Kruse, 66, of Marshall, will be held at 2 pm on Saturday at Wesley United Methodist Church in Marshall. Visitation will be Friday from 4-8pm, also at Wesley, with a prayer service at 8pm. There will be a family-only internment at the Marshall Cemetery. Military honors will be furnished by American Legion Post #113 of Marshall. Jeff died on Tuesday, October 22, 2013, at his home, after a nearly four-year battle with Multiple Myeloma, a cancer of the plasma cells. Jeffrey Eugene Kruse was born March 26, 1947 in Tyler, MN to Almer and Betty (Tripp) Kruse. His family moved to Pipestone in 1952, and he spent the rest of his childhood there, graduating from Pipestone High School in 1965. He attended one semester of college at California State Polytechnic University in Pomona, CA, but then chose to enlist in the military in the spring of 1966, believing it was the right thing to do. He served a tour of duty as a corporal with the Marines in Vietnam, providing engineering support close to the demilitarized zone until his honorable discharge in November 1968. Jeff returned to Marshall, where he went on to marry Catherine Jean Hammond on July 11, 1970, at Wesley United Methodist Church, and later graduated from Southwest Minnesota State University in May of 1975. Jeff worked in sales and human resources at Schwan's of Marshall for 18 years, and later co-founded Customized Consulting with Linda Nelson, and spent several years working with Nitro Ice Cream concessions. He also served on the school board for Marshall Public Schools for 13 years, the Minnesota School Board Association for 5 years, and the Southwest/West Central Service Co-Op Board for 9 years. He was also a board member for Community Services and Prairie Home Hospice, as well as a Referendum Co-Chair for Marshall Public Schools, a committee member for the Regional Sports Center project, and a volunteer driver for Western Community Action. Jeff was a dedicated member and leader for Wesley United Methodist Church, and was a certified lay speaker for 24 years, and the statewide conference lay leader for the Minnesota Conference for the United Methodist Church. Jeff's interests included the Twins, golf, and cars, and he truly loved to spend time with his ever-growing family. He is survived by his wife, Cathy, of Marshall; sons Brandon (and Christi) of Minnetonka, Brad (and Gaelle) of Marshall, and Matt (and Gretl) of Rochester; five grandchildren, Grace, Nathan, Liam, Claire, and Sage; his sister, Marge (and Jerry) of Pipestone, and brother, Les (and Gloria) of Sioux Falls; eight nieces and nephews, several grandnieces and grandnephews, and many cousins and loving friends. He was preceded in death by his parents, Almer and Betty, and his father-in-law, Luther "Bozy" Hammond. Blessed be the memory of Jeff Kruse. In lieu of flowers, please consider making a donation to one of the following charitable organizations: Wesley United Methodist Church, Mayo Clinic Cancer Center, Avera Cancer Institute of Marshall, Multiple Myeloma Research Foundation, or Pride in the Tiger Foundation.

MARSHALL - Funeral services for Jeff Kruse, 66, of Marshall, will be held at 2 pm on Saturday at Wesley United Methodist Church in Marshall. Visitation will be Friday from 4-8pm, also at Wesley, with a prayer service at 8pm. There... View Obituary & Service Information

The family of Jeff Eugene Kruse created this Life Tributes page to make it easy to share your memories.

Send flowers to the Kruse family.