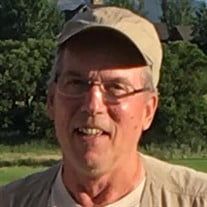 Jeff Olson, age 72, of Marshall, Minnesota, died unexpectedly on Monday, April 26, 2021, at his home. Memorial Services will be 2:00 p.m. Monday, May 3, 2021, at the Hamilton Funeral Home in Marshall. Interment will follow at the Marshall Cemetery. Visitation will be held one hour prior, from 1:00 p.m. until the time of service at 2:00 p.m., also at the Hamilton Funeral Home. Occupancy limits and social distancing must be observed throughout all services. Masks are still required at all public indoor gatherings. Jeffrey Bruce Olson was born on September 28, 1948, to Bruce and Elizabeth “Betty” (Jefferson) Olson in Marshall, Minnesota. He attended Marshall area schools and was a 1966 graduate of Marshall High School. Jeff then attended the University of Minnesota for a couple of years before enlisting in the United States Navy and serving during the Vietnam War. Upon returning home, Jeff worked with his father and later Greg Shaikoski where he began developing his career as a carpenter. He took a few years working in Washington, Minnesota, and South Dakota while also finishing his engineering degree at Iowa State University. Jeff returned to Marshall in the early 1990s to begin his partnership in Tutt and Olson Construction. He designed and built a number of unique custom homes and remodeling projects, each showcasing his signature ideas and creations, before focusing on cabinetry. He spent the last 25 years working with Minnesota Cabinets in Marshall and, in his various roles, created many close friendships with both coworkers and clients. Jeff was a creative and gifted wood worker and carpenter. He managed the most unsolvable projects and thought of his craft as artwork. His talents will be remembered in many of the homes around the Marshall area. Jeff was a very caring and loving guy, almost to a fault. This was evident over the years in the love and care of his German Shepherds: Bandit, Murphy, Fina, and Maggie, whom he cherished. There was no doubt that his dogs were the center of his life, and he would do anything to make their lives the best a dog could hope for. Jeff was even known around town as “the guy with the dog” and would often be seen walking his best friend. Jeff’s love and caring heart did not stop with the dogs. This self-proclaimed “hermit” had morals rooted deeply in the “Golden Rule.” Jeff treated everyone with love and respect. Jeff would not hesitate to give the shirt off his back to someone in need. His work ethic and attention given to the task at hand were never lacking. Jeff fully inherited the Olson gene that manifested in him always giving 100%. He would be proud that it was recognized in the way he lived his life, in his work, and in his family. Jeffrey Olson died peacefully on Monday, April 26, 2021, at his residence. He had reached the age of 72 years, 6 months, and 29 days. Blessed be his memory. Jeff will be lovingly remembered by his son, Chris (Anna) Olson of Blaine; two brothers, Jack (Sis) Olson of Carbondale, CO, Jon (Hilary) Olson of Austin, TX; nieces and nephews, Johnny (Ashley) Olson of Coolidge, GA, Annie (Dan) Broderick of Arlington, VA, Jeffrey Olson of Austin, TX; his beloved four-legged companion, Maggie; grand-dog, Chloe; grand-cat, Sid; other relatives, and many friends. He is preceded in death by his parents, Bruce and Betty Olson. In lieu of flowers, memorials are preferred.

Jeff Olson, age 72, of Marshall, Minnesota, died unexpectedly on Monday, April 26, 2021, at his home. Memorial Services will be 2:00 p.m. Monday, May 3, 2021, at the Hamilton Funeral Home in Marshall. Interment will follow at the Marshall Cemetery.... View Obituary & Service Information

The family of Jeff Bruce Olson created this Life Tributes page to make it easy to share your memories.

Send flowers to the Olson family.