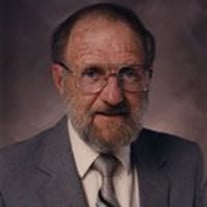 Jerry Fifield, age 71, of Marshall, passed away at his residence on Thursday, August 9, 2007. Funeral services will be 2:00 P.M. Saturday, August 11, 2007 at the Hamilton Funeral Home. Burial will be in the Arco City Cemetery. Visitation will be 5:00 P.M. to 7:00 P.M. Friday and continue on Saturday, at the funeral home, one hour prior the service. Jerry Milton Fifield was born April 3, 1936 in Marshall, MN, to Milton Abner Fifield and Marie (Petersen) Fifield. He graduated from Marshall Senior high School in 1954. Following his graduation, Jerry attended four years of college at South Dakota State University. On October 18, 1958, Jerry and Joyce (Minick) were joined in marriage. They began their lives together in Counsil Bluffs, IA, later moving to Cherokee, IA. From 1958 until 1962 Jerry served his country as a member of the United States Army, stationed in Korea. Returning home, Jerry was employed by the Iowa Department of Transportation as a bridge inspector. In 1997, he retired and moved back to Marshall, MN, with his wife. Together, they enjoyed traveling with their good friends, Art and Louise Olson, visiting casinos, attending auctions, and adding to their many collections. Joyce and Jerry enjoyed quite weekends on Lake Minnewaska fishing, visiting with friends and neighbors. On July 18, 2004, Jerry lost his best friend and life-long companion to cancer. However, he continued to live his life with conviction and compassion. Jerry volunteered time at the history center at SMSU, Prairie Home Hospice, the annual Christmas dinner at Holy Redeemer Catholic Church, and he was a member of the American Legion. Through his volunteerism at SMSU, Jerry acquired a passion for genealogy. He spent countless hours helping others develop family trees and learn of their heritage. Jerry was a friend to many; the breakfast group at Hy-Vee, his casino friends, his neighbors, and his very best friends at “Sam’s”. Jerry Fifield was born on April 3, 1936, and died on August 9, 2007. He reached the age of 71 years, 4 months, and 6 days. Jerry is survived by his sister, Jenyne (and Bob) Bagley of Arco, MN; brothers, Jack (and Marcy) Fifield of Pierre, SD, and James Fifield of Starbuck, MN; and many nieces and nephews. In lieu of flowers, memorials are preferred, in Jerry’s name, to the Prairie Home Hospice in Marshall. Blessed be the Memory of Jerry Fifield.

Jerry Fifield, age 71, of Marshall, passed away at his residence on Thursday, August 9, 2007. Funeral services will be 2:00 P.M. Saturday, August 11, 2007 at the Hamilton Funeral Home. Burial will be in the Arco City Cemetery. Visitation will... View Obituary & Service Information

The family of Jerry M. Fifield created this Life Tributes page to make it easy to share your memories.

Jerry Fifield, age 71, of Marshall, passed away at his residence...

Send flowers to the Fifield family.