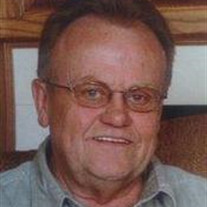 Milroy: Gerald “Jerry” Hoffbeck, age 64, of Milroy, passed away at the Golden Living Center in Wabasso on Thursday, August 18, 2011. Funeral services will be 1:30 P.M. Wednesday, August 24th at St Stephen Lutheran Church. Burial will be in the Marshall Cemetery. Visitation will be 4:00 P.M. to 8:00 P.M. with a 7:00 P.M. prayer service Tuesday at the Hamilton Funeral Home. Visitation will continue at the church on Wednesday, one hour prior to the services. Gerald “Jerry” Alan Hoffbeck of Milroy was born on November 7, 1946 in Redwood Falls, Minnesota to Francis and Evelyn (Spong) Hoffbeck. He was baptized at Bethany Lutheran Church in Gilfillan and confirmed at Our Saviors Lutheran Church in Milroy. He graduated from Marshall High School in 1964. He was married to Kris (Havens) Kring of Sioux Falls from 1969 to 1983. On July 13, 1984, Jerry was united in marriage to Sandra “Sandy” (Hirdler) Simon in Redwood Falls. His enjoyments in life were classic cars (past member of Shades of the Past car club), motorcycle riding (past member of the Brotherhood), woodworking (making birdhouses and decorative boxes), fishing and doing things with his grandkids. Jerry passed away, surrounded by his family, at the Golden Living Center in Wabasso on Thursday, August 18, 2011 following a courageous battle with cancer. He had reached the age of 64 years, 9 months and 11 days. He is survived by his wife, Sandy of Milroy; two children, Jodi (and Alan) Fadness of Truman, Todd (and Teri) Hoffbeck of Isanti; parents, Francis and Evelyn Hoffbeck of Marshall; stepson, James (and Stacey) Havens of Diamond Bar, CA; nine grandchildren, Dalton Thomas, Danyel Sterud, Paige, Brookelyn, and Zachary Hoffbeck of Isanti, Ashlea, Katelyn, Lars and Ella Fadness of Truman; three siblings, Jeanne Forsberg of Omaha, NE, Lynne (and David) Zick of Milroy and Cheri (and Chris) Christensen of Buffalo; and many other relatives and friends. Jerry was a member of St. Stephen Lutheran Church at the time of his death. Blessed be the memory of Jerry Hoffbeck. Please designate memorials to the Minneapolis Shriners Hospital http://support.shrinershospitals.org/

The family of Jerry Alan Hoffbeck created this Life Tributes page to make it easy to share your memories.

Send flowers to the Hoffbeck family.